Taroudant, Morocco ranks as the world’s fifth largest strawberries exporter, according to Statistics provided by the Ministry of Agriculture and Fisheries. 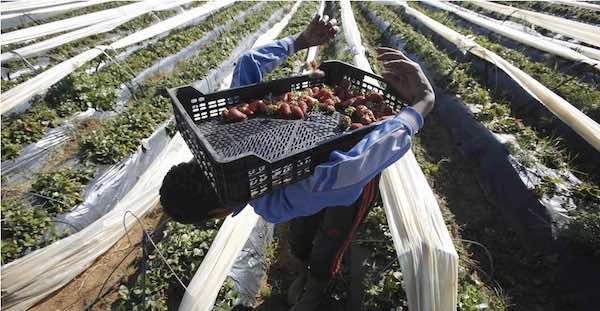 By
Larbi Arbaoui
-
Larbi is a freelance writer and assistant editor at Morocco World News.
Aug 29, 2014
Spread the love

Taroudant, Morocco ranks as the world’s fifth largest strawberries exporter, according to Statistics provided by the Ministry of Agriculture and Fisheries.

The same source said that during 2013-2014 crop year the country exported approximately 74,000 tons, representing 7 percent of the international market.

During the same year, the kingdom exported 55000 tons of frozen strawberries, representing 72 percent of the total exports and 19,000 tons for the fresh category with 28 percent.

The ministry said that 95 percent of Moroccan strawberries were exported to European countries.

Over 3,300 hectares have been allocated for strawberry farming in Morocco, mostly in the in the fertile regions of Loukkos, Souss-Massa Draa and Gharb.

To celebrate this important national product, which is unique to Morocco among Arab countries, the kingdom organizes annually the International Strawberry Festival in the Moroccan sea resort of Moulay Bousselham in order to make producers of strawberries in the region familiar with the new methods of production and conservation of this sweet fruit.