Rabat- F.C Barcelona is afraid the media will affect their starlet, limiting his public appearances. 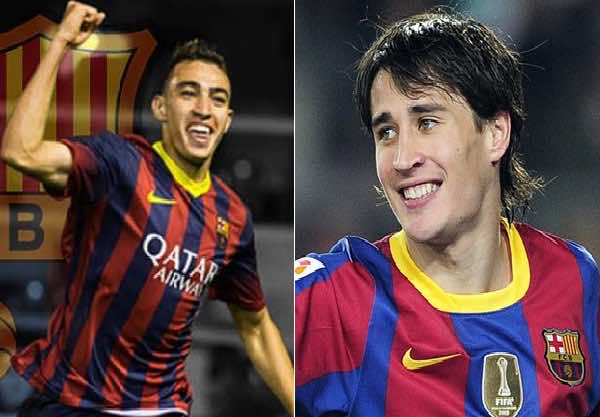 Rabat- F.C Barcelona is afraid the media will affect their starlet, limiting his public appearances.

The Catalan giants are reportedly worried by the fact that their recent La Masia graduate Mounir El Haddadi, whose meteoric rise has baffled the football world, making him a media sweetheart, will face the unfortunate fate of Bojan Krikic.

Once hailed as the next Messi and once described by former Barcelona manager Frank Rijkaard as a “treasure”, Bojan Krikic was a home grown Barcelona player who rose to worldwide fame at a very early age, thanks to his brilliant performance and decisive goals. Bojan scored the winning goal for Barcelona in a Champions League quarterfinal match against Shalke when he was only 17-year-old. In addition, he scored 12 goals in his debut season for Barcelona, which was a phenomenal performance giving the fact he was still a teenager and that he was playing for a star-studded team, where making it to the starting line-up was not an easy task.

The media hype that came along the demonstration of great talent couldn’t do Bojan any good. A young and unexperienced player, he couldn’t cope with the overdose of attention and his name being on everyone’s lips. He simply collapsed.

He reportedly pulled out of the Spain squad (he chose Spain over his father’s native country of Serbia), because he had a panic attack. After he failed to prove himself under the then Barcelona’s new manager Pep Guardiola, Bojan had to find another team in order to reignite the flame.

His next destination was AS Roma, as a loanee. But Bojan couldn’t maintain consistent form, shattering his reputation as the “next Messi”.

The same scenario is repeating itself all over again, and this time it’s 18-year-old Mounir El Haddadi, who has also been dubbed as the next Messi. According to Spanish football newspaper MARCA, FC Barcelona and their coach, Luis Enrique, are trying to “curb the media hype around El Haddadi by carefully handpicking his public appearances, limiting the amount of interviews he gives and press conferences he is involved in”.

Mounir, who was born in a mountainous town in northern Madrid called El Escorial, scored in his La Liga debut against Elche, and got four additional goals in Barcelona’s pre-season matches. He made 12 appearances for Barca’s B team, and he was crowned last season as UEFA’s youth league’s top scorer with 11 goals, including a goal from midfield during the 3-0 victory against Benfica in the final.

Yet, it is very possible that El Haddadi will be drop back down to the B team once injured players Neymar and Pedro or suspended player Luiz Suarez are in full swing and ready to play again as Barcelona’s forward trio.

Barcelona is also reporting that they want to keep El Haddadi wearing the Camp Nou side jersey for several seasons, especially if he continues playing at the same high level as he demonstrated in earlier games. That’s why Barca officials are planning to substantially improve El Haddadi’s situation by increasing his 12 million euros release clause to exceed 30 million, added MARCA.