Marrakech - The flag of the United Kingdom may be in danger of disappearing, according to the BBC. The British news outlet recently aired a program on Scottish independence with presenter Andrew Neil. The consequence of a ‘yes’ vote for Scottish independence in a referendum to be held on 18 September would be far reaching. It would open the question of the British nuclear deterrent of four Vanguard submarines and 58 Trident nuclear based missiles at Faslane, in Scotland. 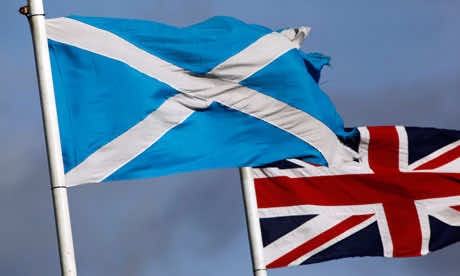 Marrakech – The flag of the United Kingdom may be in danger of disappearing, according to the BBC. The British news outlet recently aired a program on Scottish independence with presenter Andrew Neil. The consequence of a ‘yes’ vote for Scottish independence in a referendum to be held on 18 September would be far reaching. It would open the question of the British nuclear deterrent of four Vanguard submarines and 58 Trident nuclear based missiles at Faslane, in Scotland.

The Scottish First Minister made it clear that in the event of Scottish independence, the Faslane base must close and the Trident nuclear force would have to find another port. The program suggested that the UK government does not seem to have an alternate location. This could conceivably mean the end of the British nuclear deterrent, just as Russia seeks to return to its Cold War antagonistic stance toward the West.

Simon Jenkins, a distinguished journalist, welcomed this military downsizing, as it would hasten the process of the UK’s adjustment to its new role as a smaller country: a much needed reality check, he inferred. He also doubted that the term “British” would continue to be used, and “English” would become the accepted term. Experts suggested that other parts of the United Kingdom might also seek changes to their constitutional relationship with the United Kingdom. Former Northern Irish First Minister David Trimble said that a ‘yes’ vote for Scotland could encourage a renewed impetus towards full Irish independence. He noted the strong relationship between Northern Ireland’s Protestant political organizations and similar bodies in Scotland.

A Welsh politician said that Scottish independence could also encourage further autonomy and self-government for Wales, although full independence is unlikely.

Nicholas Farage, leader of the UKIP party, noted that the red cross on a white background, the flag of St. George, was already being widely used in England. He felt that the setup, where Scottish and Welsh MPs voted on matters pertaining to England, only could not continue in its present form. There was also speculation about the future of David Cameron as Prime Minister and leader of the Conservative Party in the event of a Scottish ‘yes’ vote for independence. He has said that he would not resign in the event of a ‘yes’ vote, but it would be seen as another personal failure, following the rejection of his attempt to block the appointment of Jean Claude Juncker as head of the European Commission. This could be seen as a symptom the failure of Cameron’s EU policy, further isolating the UK within the EU.

Experts stressed however that winning a Scottish independence vote would not necessarily mean the transfer of all powers to Scotland, even if it did win the referendum vote on 18 September. Much would have to be negotiated before making a constitutional change. The question of Scotland’s currency being linked to the pound sterling, the thorny question of the division of North Sea Oil profits, and whether Scotland would take on its share of UK national debts are among items that have yet to be negotiated. The process could take years.

Even if there is no ‘yes’ vote at the referendum on Scottish independence, the process of greater autonomy for the different regions is well underway, and likely to continue. The United Kingdom is changing. A constitution that has lasted centuries will probably have to change as well. It will perhaps be some time before a Scottish embassy opens in Rabat with its white and blue flag. The United Kingdom’s entrepreneurial private sector economy remains strong, and is growing despite the recession. The City of London remains a key global financial center and an important partner for Morocco. It may well be that devolution in the UK may yet offer more independent opportunities for investment in the Kingdom.