Austin - My journey to America was rather twisted. I had to fly from Casablanca airport via Madrid and Dallas, before reaching Austin. Throughout these points, my mind couldn’t stop making comparisons. I don’t know if this way of thinking is normal since this is my first trip abroad, but I suspect that in my case, as well as the case of many of my generation and the generations before mine, the old issue of our relation with the West stands behind my persistent comparisons. 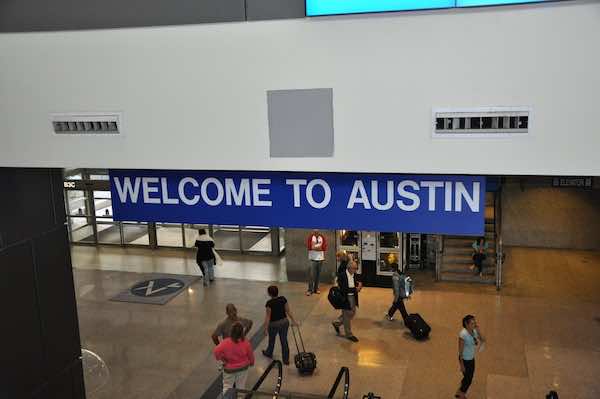 Austin – My journey to America was rather twisted. I had to fly from Casablanca airport via Madrid and Dallas, before reaching Austin. Throughout these points, my mind couldn’t stop making comparisons. I don’t know if this way of thinking is normal since this is my first trip abroad, but I suspect that in my case, as well as the case of many of my generation and the generations before mine, the old issue of our relation with the West stands behind my persistent comparisons.

My first flight was scheduled at 8:10, but I arrived at the airport about two hours in advance. My brother, who drove me there, had a difficult time to park the car. Inside the airport, people were lined before numbered counters, but it was difficult to tell who was on the line and who was out. I chose one but when my turn came, I was told that I should have chosen a different one. I was not the only one, and soon there was a mess. Many people started complaining. While I was waiting for my turn on a second line, an airport employee called for passengers of the 8:10 flight to Madrid to go first; otherwise, they would miss the plane. Because of the crowd, I barely found my way to the officer, who apparently had received the job very recently, judging from her frequent consultations with the colleague next to her. A young couple was protesting as the officer was dealing with my case. I didn’t understand why.

There was a long line to the police officers, but it was better organized. We were given a small form to complete, which I didn’t because I didn’t have a pen. I was ashamed when the officer told me angrily to complete the form first, and addressed the next person. When the whole procedure was over, I could already hear my name being called on a loud speaker: the plane was about to depart, and I was late, along with some other passengers.

At Madrid airport, things went rather smoothly. The ladies who did the checking tried to speak English, though with a heavy accent. The Moroccan couple who was complaining at Casablanca airport started complaining here, too. This time, I witnessed everything. They had in their case some goods that the customs officer deemed valuable and needed to be registered. The couple either didn’t understand or simply thought it unfair to pay money for goods that probably were not meant for sale. There were many other Moroccans, and some of them barely spoke a foreign language or none at all. I thought that we owed a lot to these people who, while working to make their lives better, also help their fellow Moroccans by sending much needed foreign currency home.

When we got on the plane, it was about time to depart, but the flight was delayed for a very long time. The voice of the captain kept reassuring the passengers now and then that the delay had nothing to do them, but rather with cargo.

After about twelve hours in the sky, the captain finally announced our landing. Dallas airport was futuristic: the voices on loudspeakers, the employees reiterating the same sentences in a monotonous way as if they were robots, the voice on Skylink announcing the next station, etc. all reminded me of science fiction movies. There were long lines before the customs offices, and most of the people were young south-east Asians, most probably students coming to America to study. They looked much disciplined in the long winding lines. Anyway, there were employees whose job was to watch over order. I thought we needed something like that at Casablanca airport. When I went through all the procedures, I found out that I had missed my plane. I received another ticket and got on Skylink to a different terminal. About an hour and a half later, we landed at Austin airport. There was my case waiting for me; nobody needed to watch over it. There were also two professors from the University of Texas waiting for me. From that time on, I was in good hands.

What I have reported so far are statements of fact, perhaps tainted a little by some subjectivity, but not consciously distorted to serve some hidden objective. But I doubt that a Moroccan reader will take them as they are. The act of reading is never neutral, and much less so when it comes to the question of East-West relations. Most probably, the events at Casablanca airport will be magnified so that they become indications of characteristic disorder rather than restricted to a single morning. On the other hand, the order reported in the other airports will be understood as also characteristic. In fact, all the positive aspects of “them” and the negative aspects of “us” will be focused on, magnified and recalled. Our good side and their bad side will simply be ignored. Why should this be so? Why are we ready to make comparisons that are not in our favor? Do we really have all the bad things, and they all the good things? More will come in the next letter.