Rabat - Head of government Abdelilah Benkirane met, on Monday in Rabat, with a delegation of US congress led by Virginia's senator Timothy Michael Kaine. 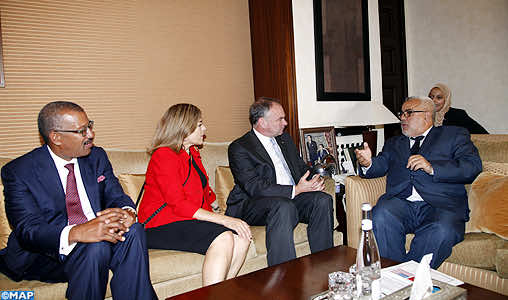 Rabat – Head of government Abdelilah Benkirane met, on Monday in Rabat, with a delegation of US congress led by Virginia’s senator Timothy Michael Kaine.

During this meeting, the two sides surveyed bilateral relations which were given new momentum on the back of the summit meeting between King Mohammed VI and President Barack Obama during the sovereign’s visit to the USA in Nov. 2013.

This meeting was an occasion to underscore the importance of cooperation between the United States and Morocco in several areas, mainly economically, politically and at the security level, said the US senator in a statement to MAP after the talks which were attended by State Minister Abdellah Baha and USA ambassador to Morocco Dwight L. Bush Sr.

Benkirane highlighted the important reforms made by Morocco in all areas, underlining the initiatives taken by the government in order to improve the business climate and encourage investment.

The Head of Government also lauded the programs carried out in Morocco as part of the partnership with the Millennium Challenge Corporation (MCC).