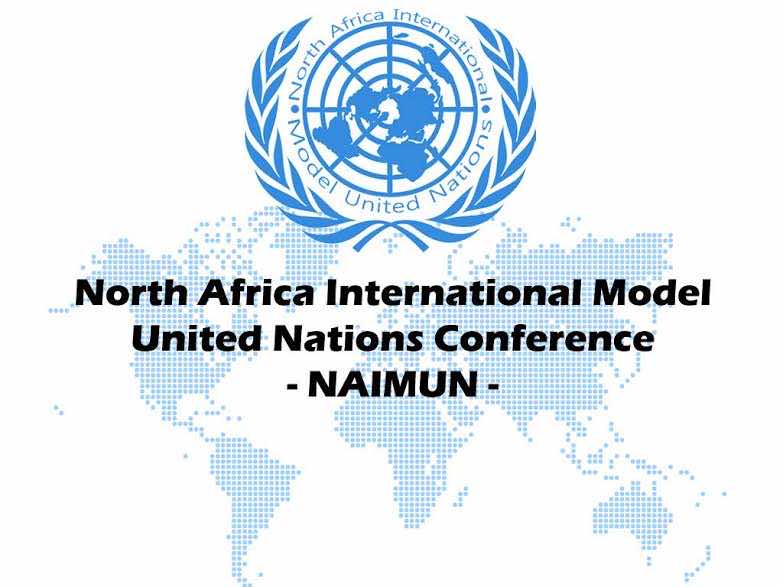 Africa International Model United Nations (NAIMUN) is organizing the 2nd edition of the annual conference which will be held from the 26th-28th of September 2014 at the Faculty of Letters and Humanity in Marrakech, Morocco. The event will bring together 300 bright young students from all over the world with the aim of building a foundation for open dialogue in the spirit of peace and harmony.

NAIMUN is the biggest student-run Model United Nations conference in Africa with four sub-brunches in Morocco, Tunisia, Algeria and Egypt founded in 2012. September 26th will be the date when the Middle East and North Africa’s future leaders will meet once again to share, discuss and debate global issues after the Tunisia conference last year. The three-day conference will be a chance for all students to present their case on different topics.

Mohammed Taweh, the president of NAIMUN mentioned, “NAIMUN delegates assume the role of Ambassadors or NGO Representatives to defend the interests of their assigned countries/organizations in the best possible manner during the conference”. Moroccan NAIMUN 2014 will be a crucial opportunity for students to increase their knowledge of international diplomacy within the United Nations and the world, develop their communication/debate skills and learn from worldwide experts. The conference will have an enormous impact on the participants’ personal and professional development seeing as they will meet stimulating and inspirational people from over the world.

M’rah Mohamed Djamel Eddine Aboubakr, 26 years old, is an Algerian delegate. Mohamed Djamil is expecting NAIMUN to be a great opportunity to share and exchange ideas to contribute to the end of wars, misery and ignorance and to come to the realization that we are all alike no matter where we come from, what language we speak and what culture we follow—we are all one big global family.

“Sometimes the people we meet only once in our life leave a strong impression on us and remain forever in our memory despite never seeing them again”, Djamel said.

Mohamed Djamel stated that as the conference will not only be a lifetime opportunity to contribute to the future of this planet as a representative of its best interests, but also a great occasion to prepare himself for the best future possible, both professionally and personally.

“The program will also be an opportunity for me to help in the promotion of peace and understanding. During my participation in this engaging initiative, I will partake in the gathering and sharing of brilliant minds from all over the world in order to come up with new and original ideas to reinforce the best of thoughts: peace,” Djamel added.

Oussama Bouzerouata, 20 years old from Tetouan, Morocco is one of the participants. He is participating in the NAIMUN conference as a Moroccan delegate. He applied for NAIMUN because it is a good opportunity to learn about diplomacy and international relations. Furthermore, it will be a forum of exchanging and sharing ideas with other people from other countries. He states, “I am expecting the conference to be a great experience to express my opinion about global issues”.

One of the major problems facing the modern world is the differences of ethnic groups and religions. In the world in which we are living, the first dimension that comes to us is the diversity and the difference in culture, color and religion. In this world we suffer from the non-acceptance of differences between ethnic and religious groups. We are only human by our differences. The key is to learn how to know and communicate with each others’ differences.

Concerning the Moroccan and Algerian issue, Djamel said: “I send prayers for unity, peace, love and courage so that Moroccans and Algerians can end the wars and misunderstandings by turning to the realization that we are one big family; brothers and sisters in humanity. We share the same language (Arabic), same religion (Islam) and same territory (Africa).” In this case Djamel Mohamed cited the following verse from holy Quran:

“O mankind, indeed We have created you from male and female and made you peoples and tribes that you may know one another. Indeed, the most noble of you in the sight of Allah is the most righteous of you. Indeed, Allah is Knowing and Acquainted.” Quran, 49:13