Morocco World News
Home Highlights on Morocco Morocco Ranks 66 on “Where is the best place to be born?”...

Marrakech - The Economist Intelligence Unit (EIU) publishes a survey each year based on the question “where is the best country to be born?”

Marrakech – The Economist Intelligence Unit (EIU) publishes a survey each year based on the question “where is the best country to be born?”

The index of countries has also become an indicator of standard of living. Morocco ranked 66th, on par with India and Tunisia, tied for 59th, after Iran, and before Egypt.

The leader in the index is Switzerland, followed by Australia and the Scandinavian countries. 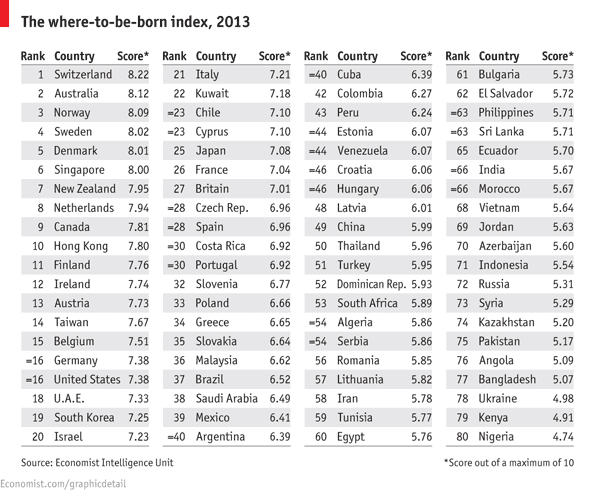 The commentary accompanying the index admits that changes in financial security and the economy mean that some countries have fallen back, like the US, which moved to 16th place. Residents in Detroit have had their water cut off because the city is bankrupt. Figures for employment have improved, but the United States and Europe are both still suffering the effects of recession and their economies are very fragile. Banks face an uncertain future and unemployment is still high; worse in Southn than in the North. But indicators change: salaries are increasing in Japan after of years of no growth.

One of the indicators both for the best place to be born and live is education, because a child’s education is so important. By general agreement, Morocco’s education system requires reform, and this perhaps explains why Tunisia has a higher score in the index. Hospital services are also an important factor, and Morocco’s medical services need to improve, according to popular opinion.

By other standards, Morocco can be assessed far more favorably. Public transportation, road, rail, and air links have improved proportionately over the years. The Moroccan middle class has grown substantially. New industries, such as automotive and aeronautical construction, are doing extremely well, but unemployment amongst the young is still historically high. Job opportunities are limited. Only ten percent of the population has a pension. Salaries are very low for many.

However, Morocco has avoided the banking crisis afflicting Europe and the US, and its banking sector appears stable. Morocco is seeking new markets in the Middle East and Africa and remains economically versatile. In terms of quality of life, climate stability, and family life, Morocco should score highly. It has a relatively secure environment compared to its neighbors in terms of terrorism. Family, religious stability, and an overwhelming support for Morocco’s monarchy heavily boost Morocco’s score.

Of course the EIU’s index continues to follow a Western mindset that does not recognize the impact of changes such as the global recession. The situation in the United States for even part of the middle class is dreadful. Some in the US live on limited salaries, are unemployed, and have insufficient pensions. States that once boasted dynamic economies with thriving business classes can now be said to have failed their populations. Even Switzerland has had no growth in the second quarter, according to the BBC. Germany’s economy is also suffering. Heavy taxation and no salary increases bite deep, and the climates are rainy and cold. The rest of Europe is in a far worse state, with an increasing phenomenon of food banks for those who cannot afford food prices. Therefore, there are several important factors which could help in Morocco in the EIU’s index in the future if the study can overcome its Westernized bias.