Rabat- Amid calls for criminalizing any attempt at normalization with Israel, a Moroccan Amazigh activist has sparked a huge controversy in Morocco, after he reportedly called upon Morocco to expand its ties with Israel. 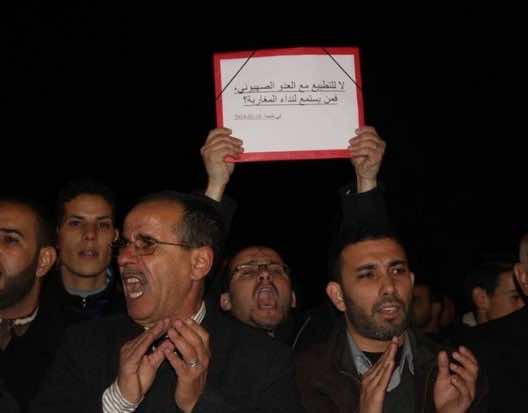 By
Aziz Allilou
-
Aziz Allilou is a student at the Higher Institute of Media and Communications (ISIC) and Morocco World News correspondent in Rabat.
Sep 9, 2014
Spread the love

Rabat- Amid calls for criminalizing any attempt at normalization with Israel, a Moroccan Amazigh activist has sparked a huge controversy in Morocco, after he reportedly called upon Morocco to expand its ties with Israel.

The President of the World Amazigh Assembly (AMA), Rachid Rakha, has reportedly called for the normalization of relations between Israel and the Arab states, including Morocco, according to Art19.

Rakha stated that a “normalization of ties” between the Jewish state and the Arab world, in particular Morocco, “would facilitate the task of reaching a political solution to the Palestinian cause.”

The Amazigh activist stated that, “isolating the Jewish state from the rest of the world will only lead to more tyranny and dictatorship.” The boycott of Israel needs to be lifted, he said.

At the same time, Rakha has filed a formal appeal with the International Criminal Court to criminalize Israel over war crimes committed against the Palestinians.

Rakha’s statements have sparked a controversy in Morocco. Moroccans are generally staunchly opposed to any relations with Israel. Some Moroccan activists have even called for the outlawing of any “normalization” with Israel.

Alyaoum24 quoted the president of the Moroccan Observatory Against Normalization, Ahmed Ouihmane, as saying that the Amazigh activist’s statements prove that “there is an Israeli plan to rip apart the social fabric of Morocco.”

“The former head of Israel’s Military Intelligence Directorate (IDF), Amos Yadlin, has said many times that he has established a networking of spies in Morocco,” Ouihmane reportedly said. “These statements confirm that this network of spies does exist in our country.”