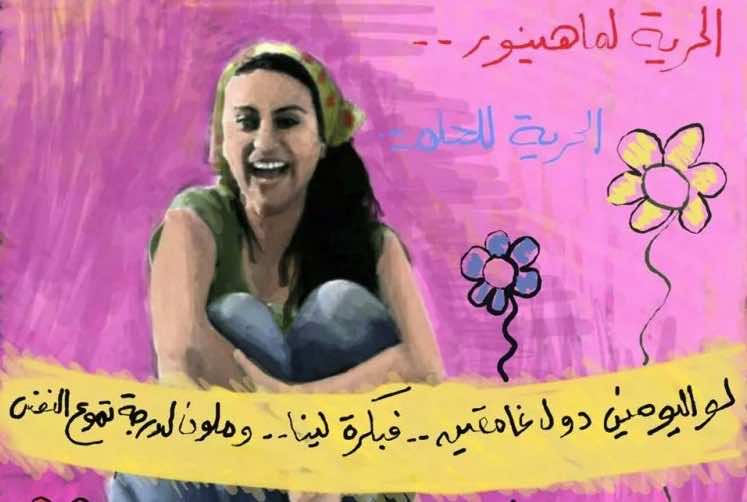 By
Menan Khater
-
Menan Khater received a bachelor of arts in journalism from Cairo University in May 2013, but she already has gained varied experience as a writer of news and features.
Sep 9, 2014
Spread the love

As soon as the masses flocked inside the huge, colorful marquee located in the beating heart of downtown to attend the monthly public festival of Al-fann midan, she started stringing up her drawings at one of its corners. Those colorful drawings share the same colors, background and theme but feature different faces.

Ranwa Youssef, an old hand fine artist and political activist, who is based in Alexandria, launched a gallery under the title “freedom to the dream” to feature her friends who were detained following the recently issued protest law.

The protest law was issued back in November 2013 by interim president Adly Mansour, at a time of weekly bloody clashes between the Muslim Brotherhood (MB) supporters and the security forces. The law obliges any rally coordinator to submit a written notice to the interior ministry at least three working days in advance, the fact that provoked political activists from various affiliations to organize more protests, against the law.

91 Egyptians are currently detained under the protest law, out of 40,000 others who are detained since MB regime ouster, according to AMNESTY international reports.

Mahienour El-Massry, an Egyptian lawyer and political activist from Alexandria, often dubbed as the “voice of revolution” has been sentenced to six months for protesting last May.

In the following interview, Youssef who is a close friend of Mahienour, explains how the different security hurdles in Egypt over four regimes have impacted her experience as an artist and active politician.

MWN: When did you start drawing?

Ranwa Youssef: I started drawing since I was studying fine arts in college. However, I haven’t used arts in any form of political expression until the death of our friend Khaled Saeed in 2010.

At that time I started getting the stencils and pictures to draw graffiti for the first time, and as I started witnessing an increasing number of people on the streets few months before the revolution, I felt encouraged to draw more graffiti.

MWN: How did the people and the police in Alexandria respond to that?

Ranwa Youssef: The people welcomed the idea, during the 2011 revolution and through the transitional period afterwards. The security situation was also very loose, we continued doing graffiti even under Morsi’s rule. Now, whenever we start drawing a new graffiti, it gets removed by the police. Which sounds very weird to me, because I believe if a graffiti has some mistakes, it’s part of the people’s culture and part of a historical era that should be reserved, just like the graffiti on Berlin Wall.

MWN: Why did you launch “Freedom to the dream”?

Ranwa Youssef: After the June 30 uprising I started creating my own work and also many people I know got arrested. I chose the name ‘freedom to the dream” to launch a series of portraits for them, because nothing can stop a dream, not even a prison cell. The series of portraits was first published online, but then I felt the necessity to take it to offline galleries, as it helps maintain the detainees presence outside the cells; passersby would start asking about their stories when they see their pictures.

Ranwa Youssef: Mahienour is one of my closest friends, we are both members of the Revolution Socialist group, and we have been actively engaged in many political events since 2008. In 2009, we also joined a protest during the attack against Gaza, and then took part in many protests against Khaled Saeed’s death, until the revolution started in 2011.

MWN: What are the most significant changes you have witnessed before and after the revolution during those rallies?

Ranwa Youssef: The number of people. Before the revolution we used to jubilate if the rally was joined by only 300 person. Now millions of people take the the streets fearlessly, without instructions from anyone.

MWN: What happened on the day Mahienour got arrested?

Ranwa Youssef: During the fourth hearing session of the policeman charged with killing Khaled Saeed, Mahienour along with 6 others stood peacefully outside the court in May 2013. We did this countless times before, but on that day there was an order for Mahienour’s arrest.

Mahienour and I believed she should show up, because she is not guilty and we are all against this law, and fleeing will not be the best option.

Usually, after you go to the police station a report is filed, until the they arrange a hearing session for you, but what happened on that day was very shocking.

She got transferred to another district, where another judge sentenced her to two years in jail without investigations, without listening to the lawyers, and without giving her a chance to defend herself.

It does not really matter if the verdict was then reduced to six months because it is based on an unjust law. Mahienour paid a really high price more than anyone could possibly imagine.

MWN: What would you say to those who label the current political detainees as “terrorists”?

Ranwa Youssef: Mahienour always stands up against any form of violence. No doubt that there are many other people who took advantage of our peaceful revolution, on top of them the MB group who collaborated with the old regime and tried to restore their old policies.

But that does not justify the protest law. I believe the only way to “terminate” this law, is to peacefully express our concerns towards it.

This is my second contribution to Al-Fann Midan, I’ve increased the number of portraits. Some of the people I featured earlier have just been released.