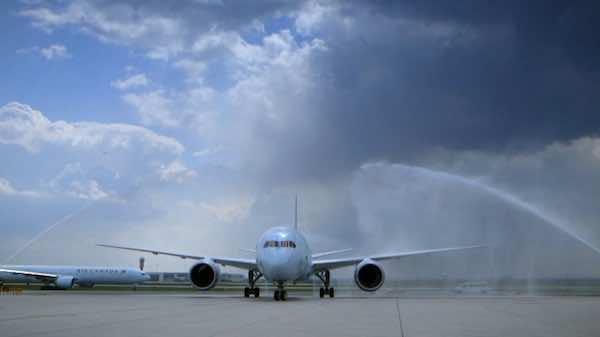 However, some Boeing employees say they have more issues with the plane than just the battery.

A memo obtained by Al Jazeera shows Boeing altered its quality standards in 2010, at a time when the 787 was already two years delayed.

On seeing the document, Cynthia Cole, a 32-year-veteran engineer at the company, and former president of Boeing’s engineers union, SPEEA, says, “You don’t change your quality process for schedule.  You make quality happen in the schedule. They’re short-changing the engineering process to meet a schedule. I don’t see how these people who write these things and agree to these things, you know, and the signatures down here, how they sleep at night.  I just don’t get it.  How can you do that? As an engineer, I find that reprehensible.”

John Woods, a former manufacturing engineer in Charleston, South Carolina, one of two sites where Boeing assembles the 787, says, “There’s no doubt there are bad repairs going out the door on the 787 aircraft. I am worried that sooner or later, there’s going to be a structural failure on the fuselage.”

A whistleblower at Boeing South Carolina tells Al Jazeera, “It’s been eating me alive to know what I know, and have no avenue, no venue to say anything. With all the problems reported on the 787, there’s 90 per cent that’s getting swept away…hushed up. It’s an iceberg.”

The whistleblower, using a hidden camera, finds workers discussing drug abuse. The worker also finds that many of those constructing the planes would not fly on the 787:

c: “Yeah I probably would, but I kind of have a death wish too.”

a: “I wouldn’t fly on one of these planes… Because I see the quality of the fu**ing sh*t going down around here.”

e: “It’s all coke and, um, painkillers and, what’s the other one… You can get weed here; you can get some really good weed here.’

a. “They don’t drug test nobody… There’s people that go out there on lunch and smoke one up.”

Al Jazeera has also found that questions about the battery’s safety persist. Donald Sadoway of the Massachusetts Institute of Technology looked at Boeing’s solution to the original problem and concludes: “I don’t think it’s a sufficient fix. Even inside that steel box with all of its fortifications, all of the elements are still there for fire.”

Boeing rejects the allegations in the documentary. The company says:

1.  It is confident that its battery fix prevents failures.

2.  It uses one FAA-approved quality system for the 787 in Everett and Charleston.

3.  Its memo is fully consistent with Boeing’s robust quality assurance system and states it does not signify authorisation to ship parts that don’t meet quality requirements.

Al Jazeera’s Will Jordan, whose documentary will air on Wednesday, 10 September 2014, says: “After the ‘Dreamliner’ was grounded, we began to ask the question: do the problems on the Boeing 787 go beyond the battery? This film tackles that question, but it also tells a story of the transformation of an American industrial giant. As Boeing moved into the modern era of manufacturing, it changed the way it did business. This documentary uncovers some of the consequences.”