Rabat - The Union of Young African Parliamentarians, a political platform for exchange between new African political leaders, held on Thursday in Rabat its constituent Assembly. 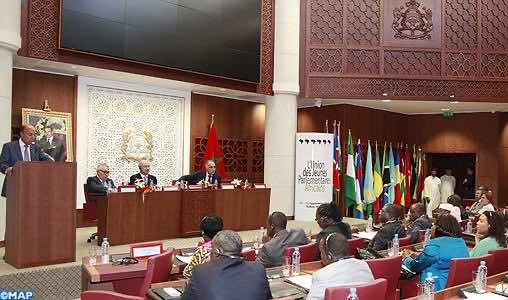 Rabat – The Union of Young African Parliamentarians, a political platform for exchange between new African political leaders, held on Thursday in Rabat its constituent Assembly.

The Union will provide a new platform to reinforce cooperation between African parliaments, as it will allow for the establishment of a legislative body up to the expectations of the African people, Vice-Speaker of the House of Representatives, Chafik Rachadi, said at the opening of the meeting, whose works will continue till September 14th.

This union “will defend our values as Africans and federate our efforts to take up the challenges in Africa in light of the deep structural changes at the global level,” he said, stressing the importance that Morocco grants to the African youth.

Created upon the initiative of an organizing committee of parliamentarians from five countries, including Morocco, the Union of Young African Parliamentarians aims at creating a synergy between the new generation of African politicians, creating a pressure group that will defend the interests of Africa, promoting the emergence of a united African identity and youth participation in African politics.

The Union is also meant to promote exchange and cooperation among African youth represented by its young parliamentarians, inform youth on African issues, bring the youth  closer to public life and involve them in building Africa.