Agadir - The skeleton of a water-living dinosaur which is believed to be the largest known predator to ever roam the planet was found in Morocco. 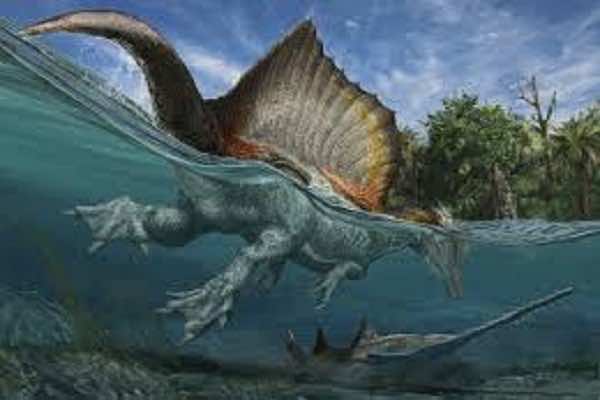 Agadir – The skeleton of a water-living dinosaur which is believed to be the largest known predator to ever roam the planet was found in Morocco.

In a study published Thursday in the Science journal and authored by Moroccan paleontologist Nizar Ibrahim from the university of Chicago, the 15-meter-long semi-aquatic creature with a crocodile-like skull was according to estimates at least 2m and a half longer than the Tyrannosaurus rex, which until very recently thought to be the largest documented dinosaur that ever lived.

The discovered dinosaur called Spinosaurus which reportedly weighed up to 20 tons had the body features of an excellent swimmer. According to the study, the animal had feet well suited for paddling and a sail-like structure rising from its spine. The nostrils were located on the back of its skull which allowed it to breathe when its head partially submerged from the water.

“The animal we are resurrecting today is so bizarre, it is going to force dinosaur experts to rethink many things they thought they knew about dinosaurs,” said Nizar Ibrahim leader of the international research team which conducted the study.

Remains of the Spinosaurus were first found in the Egyptian western desert a century ago. In 1915, based on fossils of the creature gathered from Egypt, German paleontologist Ernst Stromer named the dinosaur Spinosaurus aegypticaus or the Egyptian spine lizard.

The fossils were later destroyed during an Allied forces bombing raid on Munich’s state paleontology museum in April 1944. Fortunately sketches and photos of the partial skeleton of the Spinosaurus unearthed from Egypt survived thus giving the next generations of scientists and research teams a glimpse of the animal that lived 95 million years ago.

In 2008, Nizar Ibrahim was on a fossil-hunting expedition in Morocco when he had been approached by a local man in the desert town of Erfoud, east of the country, carrying a cardboard box which contained fossils. Ibrahim was convinced it belonged to the Spinosarus because he had seen a resembling fossil in an Italian museum.

The man led Dr. Ibrahim and his team to where he had found the Spinosaurus fossils. The place is a fossil-rich area known as the Kem Kem beds in eastern Morocco and once in the past the site of an ancient river that harbored sharks, crocodile-like animals, massive sawfish and coelacanths the size of cars. Dr. Ibrahim found more remains of the animal including parts of its skull, jaws, vertebrae and limbs.

According to media reports, the bones are currently being studied in Chicago and are destined to return to Casablanca by the end of the year to form the centerpiece of the scientific collection at the University of Hassan II.