France- Supporters of Scottish independence reacted with bitter disappointment on Friday after their hopes of breaking away from Britain were dashed, with some breaking down in tears in the streets of Edinburgh. 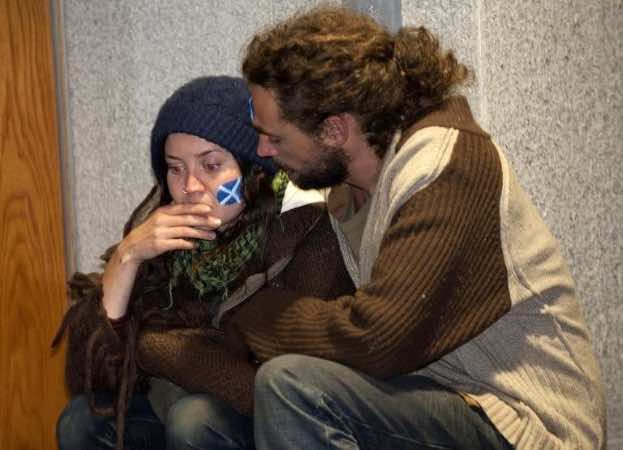 France- Supporters of Scottish independence reacted with bitter disappointment on Friday after their hopes of breaking away from Britain were dashed, with some breaking down in tears in the streets of Edinburgh.

“My feeling was just crushing, quite devastating,” said 16-year-old Charlotte Darroch, who was watching the count in the capital wearing her school uniform, pinned with lots of “Yes” badges and with a Scottish flag wrapped around her shoulders.

“We all felt it was going to go the other way. I genuinely thought the feeling on the ground was different. I don’t think people realised quite how important this was,” she said.

Darroch said she was “very attached” to the cause and would not give up hope after a large minority — 1.5 million people, or around a third of the electorate — voted “Yes”.

In the city centre near Edinburgh Castle, tartan-wearing activists surrounded by “Yes” slogans were seen crying in the rain at the end of an all-night party that saw separatists cheering and waving flags ahead of a hoped-for victory.

Iain, a 21-year-old student, said: “I am incredibly disappointed.”

Independence “was so close,” he said, adding: “For the last six months we had hopes for a better life.”

Jeoffrey Siaber, an English pensioner living in Scotland, came to commiserate with the young independence supporters.

“I know that there is a great sense of injustice here (at) being ruled from far away,” he said.

“It would be healthier if Scotland ruled itself.”

“But things will be as they were, so my life is not going to change.

“I can’t see another referendum, you never know what will happen in 20 years, but I can’t see it now,” he said.

At a coffee shop in the city centre, 38-year-old Brazilian Andreia Rodrigues said she had voted in favour of independence but understood why economic fears had swayed the vote.

“I don’t think that Scots want really to be in the union but they were afraid of things like the currency,” she said.

“I don’t blame them. I’m Brazilian and when you change currencies it’s a pain in the neck,” she said, referring to devaluations and currency changes in her homeland.

In contrast, there were scenes of jubilation in Glasgow at a “Better Together” party with union supporters cheering, hugging, dancing and crying after the momentous result.

And in Edinburgh, “No” supporter Louise Fleming, 21, said she was “relieved” at the result and would head off for a fried breakfast before going to bed.

“It’s been such a divisive referendum, we have seen the outcome, we can’t expect everything to be great tomorrow but the right outcome has occurred.”