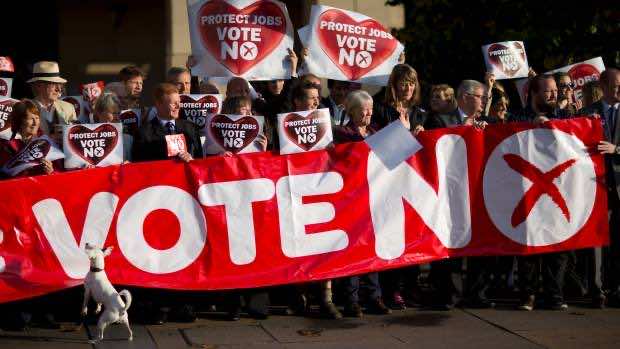 This was a blow for Scotland’s First Minister Alex Salmond who had run a very slick publicity campaign which made it look as if those backing independence might win, forcing the leaders of all three of Britain’s parties, David Cameron of the Conservatives, David Clegg of the Liberal Democrats and Ed Milliband of the Labour Party to appear in Scotland on the same day to defend the Union.

Alex Salmond called for national unity and said that the referendum was a triumph for the democratic process. Prime Minister David Cameron said the three main unionist parties at Westminster would implement their pledge of increased powers for the Scottish Parliament.”We will ensure that those commitments are honored in full,” he said.

At least the Scottish Nationalists can take comfort in the substantial measures for autonomy granted by the British government as can Northern Ireland and Wales. The constitutional changes are taking place without a breakup of the United Kingdom.

This has come as a huge relief to the business community and the European Union. Royal Bank of Scotland and the Lloyds Banks confirmed that they would not now move their operations to London. Sterling rose sharply against the Euro following the referendum vote.

President Obama had said earlier that he hoped the United Kingdom would remain United. The question of the Trident Nuclear deterrent at its Faslane base in Scotland is now settled. Former defense chiefs including General Mike Jackson had said that the British army’s effectiveness would have been adversely affected if Scotland chose independence.

In the end economic factors and the pledges by the UK government of substantial autonomy swayed the voters and the silent majority spoke. Questions still remain like the Lothian question about whether Scottish or Welsh MPs can vote or should vote on measure’s which affect English constituents only and this will have to be resolved.

In a fast changing world where national borders are changing rapidly many will take comfort in this historic vote and the preservation of national unity. It also shows that autonomy and regionalization can be a solution to local aspirations.