France- The Turkish government announced it was lifting a ban on female students wearing the Islamic headscarf at high schools, in a move denounced by opponents as undermining the basis of the country's secular society. 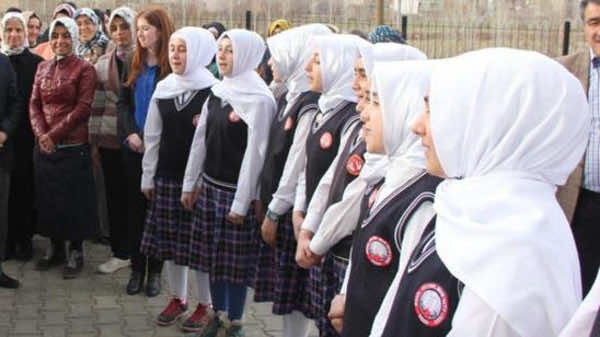 France- The Turkish government announced it was lifting a ban on female students wearing the Islamic headscarf at high schools, in a move denounced by opponents as undermining the basis of the country’s secular society.

President Recep Tayyip Erdogan, who co-founded the ruling Islamic-rooted Justice and Development Party (AKP), has long been accused by opponents of eroding the secular values of the modern Turkish state.

Deputy Prime Minister Bulent Arinc, a close Erdogan ally, said that an amendment was made to the dress code regulations for female students to say they will not be forced to keep their heads uncovered.

“I know that some female students were longing for (this amendment) to high school regulations,” Arinc told reporters after the cabinet meeting late on Monday.

Prime Minister Ahmet Davutoglu welcomed the amendment as an effort for “democratization.”

“This should not only be seen as the lifting of the ban on the wearing of headscarf,” Davutoglu told the private NTV television Monday.

“There has been an effort for freedoms and democratization in every sphere.”

Kamuran Karaca, head of the Egitim-Sen education union, said that the measures would provoke a “trauma” in Turkey.

“Turkish society is heading back to the Middle Ages through the exploitation of religion,” he said.

Last year, Turkey lifted a long-standing ban on women wearing the headscarf in state institutions as part of a package of reforms to bolster freedoms and democracy — which drew the ire of secularists who denounced the move as an attempt to Islamize the staunchly secular country.

Women can already wear the Islamic headscarf — known as the hejab — in universities. The wives of most AKP ministers wear the hijab, as does Erdogan’s wife Emine.

The founder of modern Turkey, Mustafa Kemal Ataturk, based the post-Ottoman republic on a strict separation between religion and state.

Critics accuse Erdogan, who last month moved to the post of president after over a decade as prime minister, of seeking to undermine Ataturk’s legacy, charges he denies.