New York - Close to 140 heads of state, including King Mohammed VI, and heads of government are expected starting Wednesday in New York to take part in the 69th session of the UN general assembly, from September 24 through October 1st. 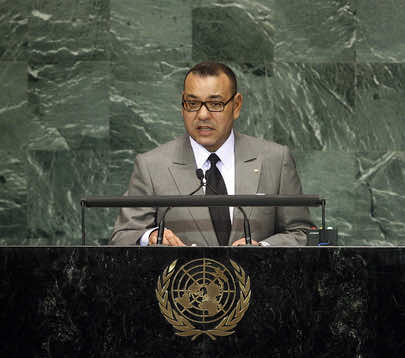 New York – Close to 140 heads of state, including King Mohammed VI, and heads of government are expected starting Wednesday in New York to take part in the 69th session of the UN general assembly, from September 24 through October 1st.

On Tuesday, the General Assembly started its week-long session with a summit on climatic changes, convened by Secretary, Ban Ki-moon, to draw a work plan and set up a worldwide fund to help poorer countries deal with the impact of climate change and invest in alternate energy schemes to curb the greenhouse gas emissions and address global warming.

The world leaders also have on the agenda several other issues amidst a whirlwind worldwide context, including the increasing threat of the Ebola outbreak and the rapid growth of the Islamic State in Iraq and the Levant (ISIL) group in swaths of Syria and Iraq.

The rapid spread of the Ebola virus in Western Africa will be the topic of a ministerial meeting (September 25) on the sidelines of the UN general assembly.

“This is not only a public health crisis, it has serious humanitarian, social and economic consequences” and could even threaten the political stability of affected countries, the UN chief had warned.

While heads of state and government are heading to New York, the fifteen members of the Security Council are preparing a draft resolution on foreign terrorist fighters.

The USA, which is sponsoring the text and holding this month’s chairmanship of the Council, hopes that the resolution will be adopted at a Council’s summit meeting on September 24 to be chaired by US chief executive Barack Obama.

Experts estimate that 12,000 combatants, from 74 countries, have joined ISIL in Iraq or Al-Nosra in Syria.

The Palestinian issue, and the situation in Libya and Yemen are other items on the Assembly’s agenda.

On the sidelines of the 69th session, other groups will hold ministerial meetings, such the Organization of Islamic Cooperation, the United Nations Alliance of Civilizations (established in 2005) and the Deauville Partnership with Arab Countries in Transition.