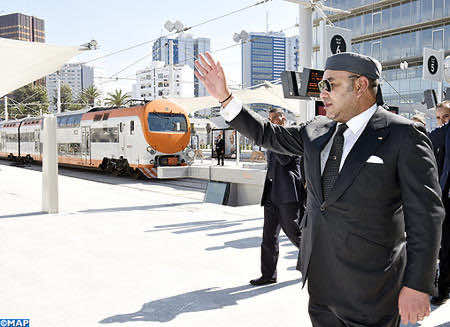 The new railway station, the first of the kind nationwide in terms of design and equipment, is part of large-scale development projects launched by the Sovereign across the country.

Located at the heart of a mutating city, the new station, worth 400 million dirhams, perfectly fits into the scheme to reshape the Casablanca agglomeration and the urban space around the railway station, at the crossroads of the metropolis’s major avenues, the city’s port and the Hassan II Grand mosque.

After the new railway compounds built in Marrakech, Fes and Tangier, designed as smart and multi-services living spaces, the Casa-Port railway station has crossed a new level with an outstanding scope in this concept that makes of railways stations a community space for customers and the large public.

The new facility, carried out by the Moroccan national railway office (ONCF) after the Sovereign launched construction in May 2008, is featured to offer integrated services (shops and leisure), contribute to the development of a genuine exchange pole adapted to daily shuttles.

The Casa-Port railway, extending over a covered area of around 33,500 square meters, was designed to receive over 20 million passengers/year and more than 5,000 travellers at rush hours. It consists of three buildings: a passenger building, an underground parking lot, and a building of ONCF offices located in parallel to the platforms.

This mega-structure combines modernity and traditional architecture with equipment and facilities meeting international standards of safety and service quality.

As part of the same project, the existing railway installations were renovated and adapted to optimum use matching the traffic evolution, for a total value of 100 million dirhams.