Austin - Why do humans feel homesick? And what is home after all? Why should I feel unsatisfied, socially speaking, by all the nice people surrounding me? Why do I need to fetch for this Moroccan by the name of Abdou, who, I was told, owns a small restaurant in South Austin? 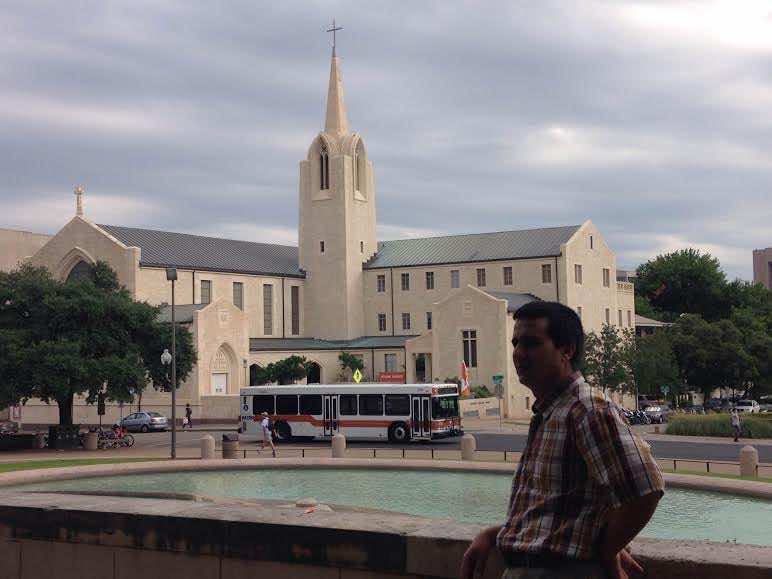 Austin – Why do humans feel homesick? And what is home after all? Why should I feel unsatisfied, socially speaking, by all the nice people surrounding me? Why do I need to fetch for this Moroccan by the name of Abdou, who, I was told, owns a small restaurant in South Austin?

To be sure, this feeling is not caused by any uneasiness about the social environment. Rudeness is a rare commodity in Austin, at least as far as I can tell. The city has nothing of the density of our urban centers or even of some other urban centers in America. When you walk around in its residential areas, you could rarely see anyone outside the house or children playing in the street or women gathered in front of doors.

If it were not for the running cars, you might think that the neighborhoods have been evacuated altogether. Even downtown, the streets are usually empty, except for those standing at bus stops or walking to nearby buildings. The only crowded place I’ve seen so far is the university. It is full of life and reminds me of the hustle and bustle of our city centers. So, there’s no wonder that one rarely, if ever, witnesses acts of violence. The feeling of homesickness that invades me now and then cannot be due to any sort of uneasiness in my current life.

Communities do not have a real existence; not the sort of existence that this table has. They only exist in the minds of individuals who believe in them. Morocco is not a piece of land circumscribed by natural and political borders, and Moroccans cannot be identified by some genetic trait or any other “objective” characteristic.

To be Moroccan is to knit threads of relations with other fellow Moroccans. The threads may not be visible, but they strongly impose themselves on consciousness, much like gravity does on material objects. When I meet Abdou, I will immediately feel the strength of the ties between us, although I’ve known or seen him before. Our eyes, our smiles, our postures, and many other things will be suggestive of the real existence of these ties. But our gestures are not ‘naturally’ linked to us; we ‘culturally’ activate them to signal our identity, that is, our membership to a certain community.

Yes, we are free to ignore our connection with our people, to reject them in favor of some other community, but we will have to bear the harsh consequences of our decision. Abdou may turn out to be cold and unenthusiastic about meeting someone from home, but I doubt he will be able to erase old memories altogether. Those memories are essentially what makes us who we are and give us the label recognized both by us and by others.

What makes me feel strange among these kind people is communication. It is not a question of language, though the way the language is used may be part of that. Nor is it a question of culture; we have been exposing ourselves to American culture for very long, no matter how remote we may be from America.

In fact, I have realized that people here aren’t as different as media discourse claims or assumes them to be. They are just like anybody else in the world, trying as much as they can to lead a happy life in their own way. What makes me uneasy is that I cannot read people easily, and when I do, I’m never certain about my interpretation. I cannot understand, for example, how you could chat with a person for quite some time one day, and when you cross him in the corridor the following day, he just nods in what looks like a greeting. What does he mean by that? Does he regret we had met at all? And why should he regret it?

If ever Abdou acts like that, I’d certainly know what he means. On his part, Abdou also would know how I would get the message. Members of a community share enough information to be able to read each other easily, though mistakenly sometimes. It seems to me that I can guess how my people feel when I see them in the street. I can see happiness or sadness on their faces; I can see sadness even in their laughter, I can see annoyance even in their quiet patience, I can see humility in their arrogance, I can see satisfaction even when they pretend to be in difficulty, I can see truth in their lies. I can understand them; nay, I can feel them. That’s what makes me one of them for better or for worse, for richer or for poorer, in sickness and in health.

I still have two more months to stay here. And before the day comes when I join my people again, I’ll keep nurturing the threads that tie me to that imagined entity called Morocco. I’ll keep listening to Hadda Ouakki, to Jamal Zerhouni, to Nas El-Ghiwan, to the late Laaroussi, to Tabaamrant, and to many others. I’ll keep recalling old memories of old events and old friends. It has been a good moment to me for self-knowledge and for knowledge of others. And of course, I’ll keep looking for Abdou; perhaps he can be a consolation in moments of bitter homesickness.