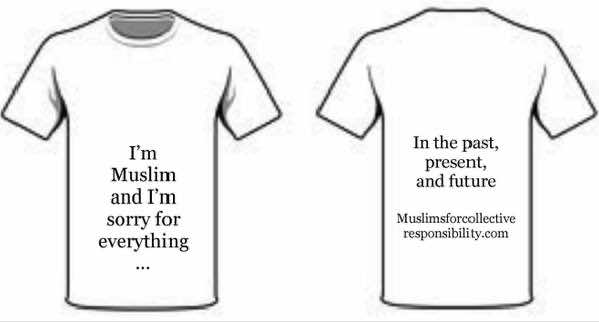 Rabat –  Muslims around the world are using the hashtag #MuslimApologies as a way to defend Islam as a peaceful religion and that ISIS’s violent acts do not represent their faith.

Since the 9/11 terrorist attacks, Islam has been a target for several different types of accusations that associate it with terrorism. Muslims around the world have been persecuted and discriminated against just for sharing religious beliefs with a terrorist group. It has been a hard time for Muslims, especially North African immigrants in Europe. It took much effort and commitment to alter—though not completely—this perception of Islam.

However, once again, Islam is associated with terrorism due to the notorious acts of ISIS, a terrorist group that claims to have an Islamic background. The world is once again blaming Islam and Muslims as a community for what ISIS is doing, nurturing hatred and contempt against the Muslims of the world.

In response to this wave of hatred, a wave of a different kind is being born. The #MuslimApologies is a campaign, led by Muslims of the world, is attempting to shed light on the fact that not all Muslims agree with the violent acts of ISIS. It is a campaign that makes use of sarcasm in order to ridicule the attempts to associate Islam with terrorism.

This hashtag is a new trend on Twitter. Muslims from around the world post tweets where they sarcastically apologize for the good things Muslims did for humanity. They apologize for Islam’s positive contributions in the different areas of life. The “apologies” focus mainly on education, scientific discoveries, human rights, and spiritual matters. Along with similar hashtags, this campaign seems to be exposing the world to a different type of Islam: one that is a tolerant, peaceful religion.

These are some examples of the tweets:

Scientists use the Quran to discover things. I’m sorry that the Quran knows more than humans. #MuslimApologies

now that we’ve seen #MuslimApologies i wanna see #WesternApologies. there’s a lot to apologize for, luckily for you Islam is very forgiving.

I’m sorry that I’m in love with a faith that the west tries to water down. #muslimapologies

I’m sorry the media has brainwashed you to believe that Islam is a religion of evil. Sorry you can’t think for yourself #MuslimApologies