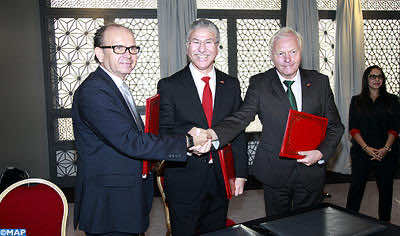 “We are very encouraged by the moderate, balanced and reasonable foreign and security policy in Morocco,” the German official told MAP on the sidelines of a conference on the theme “preventive security policy – German perspective, held by the EGE Rabat School of Governance and Economics.

“I congratulate Morocco for this policy,” he said, noting that the Kingdom “has always been a country of reason and moderation.”

In this regard, the German official stressed that Morocco is needed as a “very important voice in today’s world, a world of turmoil”.

Regarding the Moroccan-German cooperation in the field of preventive security, Eichhorn recalled the launch, earlier in the morning, of a partnership program between Morocco and Germany in health and biosecurity by signing a declaration of partnership to reinforce national capacities in the prevention, epidemiological surveillance and detection of health risks of biological origin.

The official noted that this program is part of the 2013 Rabat Declaration, which covers a wide range of political, economic and social issues upon which Rabat and Berlin are working together as part of a win-win partnership.