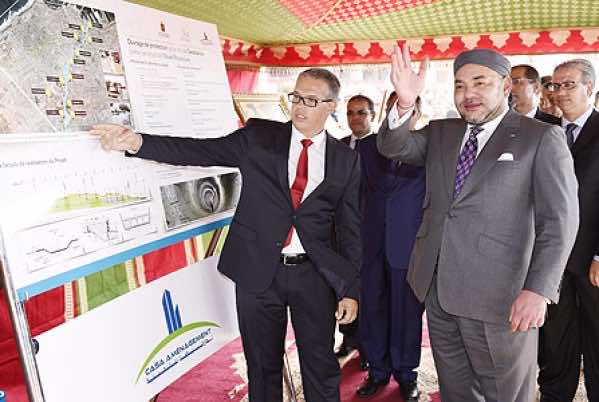 By
map
-
Oct 3, 2014
Spread the love
Casablanca  – King Mohammed VI launched and inaugurated, on Friday in Casablanca, major social projects meant to develop youth’s sports and cultural capacities, slash delinquency and school dropout rate, safeguard collective memory and reinforce medical and social offer.
These projects are worth 40 million dirhams and are in line with HM the King’s efforts to foster community-based policy, strengthen social projects, promote a comprehensive and sustainable human development and reinforce basic infrastructure in the city.
The King launched in the Ben M’Sik prefecture the building works of an Indoors Semi-Olympic Swimming Pool (16.5 mln MAD), a Drama Training Center (2.8 mln MAD), a War Veterans Cultural and Museum Center (1.6 mln MAD) and a Tuberculosis and Respiratory Diseases Treatment Center (3.61 mln MAD) at the Errahma II neighborhood in the Dar Bouazza urban commune.
The sovereign also inaugurated in Ben M’Sik the “Shabab” Park after its redevelopment totaling 15.4 mln dirhams.
The indoors swimming pool will be built over a surface area of 13,500 m2 within a period of 18 months. It will include mainly a semi-olympic pool, terraces, changing-rooms, a reception area and a management office.
This project is the fruit of a partnership between the national initiative for human development (INDH), the ministry of youth and sports, the council of the greater Casablanca region and Casablanca urban commune.
As for the Drama Training Center, it will help the beneficiaries develop their creativity and imagination, and acquire pedagogical and communication means to integrate the job market.
The 900-m2 facility will span eight months under a partnership between the INDH, the council of the greater Casablanca region and Casablanca urban commune.
The War Veterans Cultural and Museum Center will house objects, scale models and posters as a testimony of resistance movements during colonial era. The 550-m2 center will open its doors to the public in 8 months. It is undertaken by the INDH, the council of the greater Casablanca region and Casablanca urban commune.
Concerning the Tuberculosis and Respiratory Diseases Treatment Center, it will stretch over 400 square meters and will be carried out by the health ministry in partnership with Dar Bouazza. It is aimed at reinforcing and diversifying the city’s medical services.
As for the “Shabab” Park, it is meant to enhance the city’s attractiveness, improve local population’s lifestyle and protect the environment. It will offer the citizens an area for relaxation and spare-time activities.
The 5-hectare park hosts five mini football fields with artificial turf, a kids pedagogical garden, playgrounds, a fitness area and a hiking circuit. It was carried out as part of the INDH in partnership with the youth and sports ministry, the council of the greater Casablanca region, Casablanca urban commune and Casablanca prefectural council.