France- Kurdish militia fought off a fresh assault by the Islamic State group on a key Syrian town early Monday, after one desperate woman defender carried out a suicide attack against the jihadists. 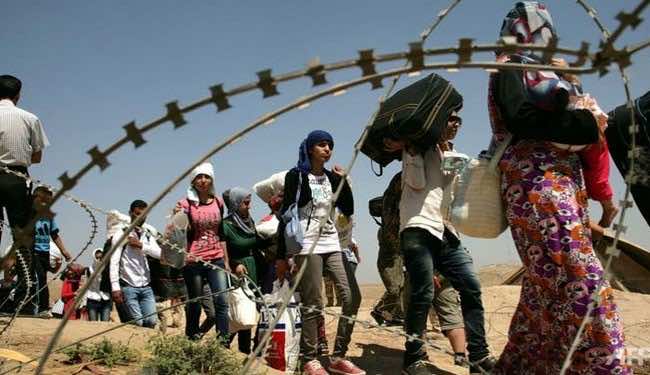 France- Kurdish militia fought off a fresh assault by the Islamic State group on a key Syrian town early Monday, after one desperate woman defender carried out a suicide attack against the jihadists.

IS militants attempted to storm the town of Kobane on the Turkish border from both east and west of a strategic hill to the south, but Kurdish fighters repulsed the attack, the Syrian Observatory for Human Rights said.

A Syrian Kurdish official inside Kobane said the town had come under heavy bombardment by the jihadists and there had been fierce clashes as the Kurdish fighters fought off the assault.

IS fighters seized part of Mishtenur Hill, which overlooks Kobane, late on Saturday, but US-led air strikes slowed their advance.

The Syrian Kurdish official said IS fighters were just one kilometre (less than a mile) from the town and that air strikes alone were not enough to stop them.

Idris Nahsen complained there was no coordination between coalition commanders and Kurdish fighters on the ground.

In a sign of the Kurdish defenders’ mounting desperation, a female suicide bomber blew herself up at an IS position east of Kobane on Sunday, the Observatory said.

It was the first reported instance of a female Kurdish fighter employing a tactic often used by the jihadists, said the Britain-based watchdog, which has a wide network of sources inside Syria.

The Kurdish official confirmed the suicide bombing but was non-committal about whether there would be more.

“I don’t know. It is related to the situation. We don’t have this strategy,” Nahsen said.

Sunday’s fighting around Kobane — also known as Ain al-Arab — killed at least 19 Kurdish fighters and 27 IS jihadists, the Observatory said.

Under assault by IS for nearly three weeks, the town has become a crucial battleground in the international fight against the jihadists, who sparked further outrage at the weekend with the release of a video showing the beheading of Briton Alan Henning.

The video — the latest in a series of on-camera beheadings of Western hostages — included a threat to another hostage, US aid worker Peter Kassig.

Kassig’s parents have issued a video plea for their son’s release, urging his captors to show mercy towards the 26-year-old former US soldier who is a Muslim convert.

His parents have also revealed that Kassig wrote them a letter in June expressing his fears of death and concern for his family.

“I am obviously pretty scared to die but the hardest part is not knowing, wondering, hoping and wondering if I should even hope at all. I am very sad all this has happened and for what all of you back home are going through,” Kassig wrote in the letter.

IS began its advance on Kobane on September 16, seeking to cement its grip over a long stretch of the Syria-Turkey border.

The offensive prompted a mass exodus from the town and surrounding countryside, with some 186,000 people fleeing into Turkey.

The source of the fire was unclear, but residents of two small border villages were ordered evacuated as a precaution.

The Turkish parliament last week authorised the government to join the campaign, but so far no plans for military action have been announced, to the dismay of Turkey’s own large Kurdish minority.

Extremist Sunni Muslim group IS has seized large parts of Syria and Iraq, declaring a “caliphate” in June and imposing its harsh interpretation of Islamic law.

The group has been accused of carrying out widespread atrocities including mass executions, abductions, torture and forcing women into slavery.

It has also released videos of the on-camera beheadings of two US journalists, a British aid worker and on Friday of Henning, a 47-year-old British volunteer driver who went to Syria with a Muslim charity.

After first launching strikes against IS in Iraq in August, Washington has built a coalition of allies to wage an air campaign against the group.

In Iraq, the pace of the coalition air campaign against IS picked up on Sunday with the first strike by Belgium and maiden combat sorties by Australia and The Netherlands.

Britain, France and Denmark have also committed aircraft to the campaign against IS in Iraq, where a fightback by Kurdish forces in the north has made slow progress while federal troops have come under renewed assault by the jihadists west of Baghdad.