Rabat - King Mohammed VI, accompanied by Prince Moulay Ismail, inaugurated, on Tuesday in Rabat, the Mohammed VI Museum for Modern and Contemporary Art, a leading project which will contribute to preserving and spreading Morocco's artistic and civilizational heritage. 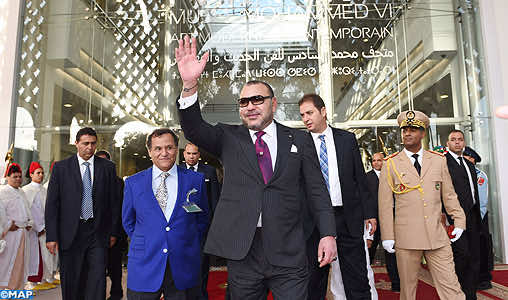 Rabat – King Mohammed VI, accompanied by Prince Moulay Ismail, inaugurated, on Tuesday in Rabat, the Mohammed VI Museum for Modern and Contemporary Art, a leading project which will contribute to preserving and spreading Morocco’s artistic and civilizational heritage.

In a speech on this occasion, chairman of the National Foundation of Museums Mehdi Qotbi underlined that the implementation of this project shows the sovereign’s will to make culture a real engine for human, social and economic development and his resolve to equip the country with high-level cultural facilities that encourage creativity and promote the principles of cultural democratization.

The Museum was designed to raise awareness and initiate the public, mainly youth, to contemporary artistic creation, and promote participation in the country’s cultural life as well as openness on international creation. It will also offer trainings and conferences to well-informed audience as graduates of architecture schools and of fine arts, and art historians.

The Mohammed VI Museum for Modern and Contemporary Art will host, on the occasion of its opening, an inaugural exhibition entitled “1914-2014: a century of creation” about Morocco’s artistic evolution.

The inauguration ceremony was marked by the screening of a documentary on the Museum directed by Noureddine Lakhmari.

The second agreement is a partnership between the National Foundation for Museums and the Employers Association (CGEM). It was inked by head of CGEM Miriem Bensaleh Cheqroun and Mehdi Qotbi.

The third is a partnership agreement between the National Foundation for Museums and the Smithsonian Institution. It was signed by Director of the Office of International Relations at the Institution Molly Fannon and Mehdi Qotbi.