Rabat - King Mohammed VI, accompanied launched on Tuesday the building works of the Rabat Grand Theater, a project that mirrors the continuous royal solicitude for art and culture. 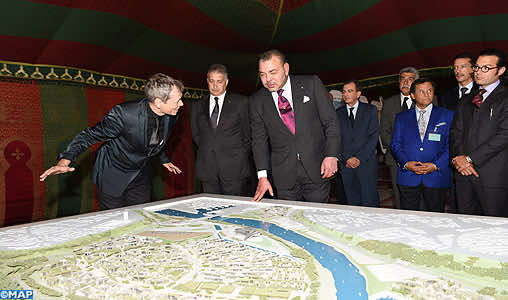 Rabat – King Mohammed VI, accompanied launched on Tuesday the building works of the Rabat Grand Theater, a project that mirrors the continuous royal solicitude for art and culture.

Located at the Bouregreg Valley, near Hassan Tower and Mohammed V Mausoleum, the Rabat Grand Theater will be a symbol of Morocco’s cultural and artistic renewal.

It will improve the access of local populations to cultural and  artistic facilities thus developing their intellectual potential and creative capacities.

The future theater, worth 1.677 billion dirhams, seeks to provide Rabat and the whole region with a facility meant for artistic activities and entertainment and capable of hosting major national and international events. It is also aimed at discovering new talents mainly among young people.

The project will be carried out by the Agency for Bouregreg Valley Development within 40 months over a surface area of 7 hectares. It will comprise notably an amphitheater that seats 7,000 people, and an auditorium (1,900 seats).

Part of 2014-2018 Rabat City Development Program “Rabat, City of Light, Morocco’s Cultural Capital,” launched by King Mohammed VI last May, this large-scale project will be constructed near a residential area, hotels and offices.