Rabat - King Mohammed VI called legislators of the two chambers to adopt a " broad-based ethics charter, which would not be limited to articles in the rules and regulations of the two Houses of Parliament." 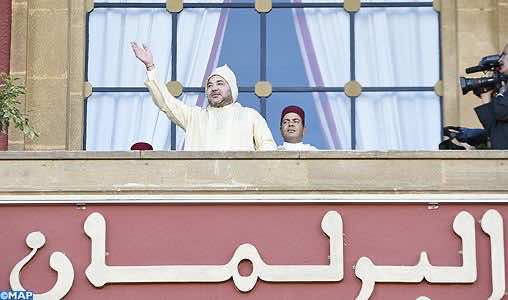 Rabat – King Mohammed VI called legislators of the two chambers to adopt a ” broad-based ethics charter, which would not be limited to articles in the rules and regulations of the two Houses of Parliament.”

“Political discourse requires being honest with the citizens, making objective analyses and ensuring that stakeholders show mutual respect, so they can all be partners in serving the nation, and not just politicians divided by narrow interests”, said the Sovereign on Friday at the opening of the first session of the fourth legislative year of the ninth legislature.

After insisting on the irreversibility of the democratic choice made by Morocco, the King expressed commitment “to seeing that this choice is further consolidated.”

The Moroccan monarch further noted that “the political discourse does not always fulfill the citizens’ expectations because it is excessively centered on partisanship and party politics,” arguing that “while each Member of Parliament and all political parties are rightly entitled to keep their political future in mind and to seek the confidence of voters, this should not be done at the expense of the nation’s major issues or of the citizens’ real concerns.”

The Royal speech also recommended that “political practice should primarily be based on close attention to the citizens’ needs, on constant contact with the people, on compliance with laws and on observation of ethical standards,” noting that some elected officials are “damaging their reputation and that of their party, harming their country’s best interests and undermining political practice in the truest sense of the term.”

“It is necessary to determine national priorities in a very responsible manner, and to make the spirit of compromise prevail, particularly when adopting the regulatory texts relating to constitutional institutions and the nation’s major reforms”, the King urged, stressing that priority should be given to bills related to the reform of the justice system, particularly the setting up of the Higher Council of the Judiciary and the adoption of the statute for judges.

After inviting the Government and Parliament “to take more advantage of the expertise available in these institutions”, the Sovereign announced “I will soon officially set up the Constitutional Court, which will have extensive powers.”

“I urge both Houses of Parliament to show a keen sense of national responsibility and take into account experience, competence and probity when choosing the members that the two Houses are constitutionally entitled to elect,” he said.

The King further called for completing the setting up of institutions of participatory democracy and good governance, stressing that this session marks a watershed in legislation, particularly the launching of advanced regionalization.

“Given the matters to be dealt with, the current legislative session is of great importance as far as the country’s political process is concerned”, he concluded.