Marrakech - King Mohammed VI delivered a landmark speech before the two houses of parliament on Friday in Rabat. 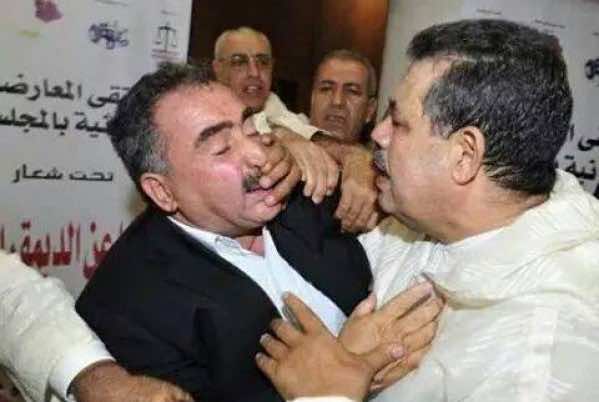 Marrakech – King Mohammed VI delivered a landmark speech before the two houses of parliament on Friday in Rabat.

During his speech, the King criticized the lack of action and effective work of the Moroccan political class, and urged it to develop “a truly ethical charter for political action.”

“Political discourse requires being honest with the citizens, making objective analyses and ensuring that stakeholders show mutual respect, so they can all be partners in serving the nation, and not just politicians divided by narrow interests”, the King said.

Shortly after the speech, a fierce fight broke out between Parliamentary Advisor of the Authenticity and Modernity Party (PAM), Aziz Lebbar, and the Secretary General of the independence Party, Hamid Chabat, both from the city of Fez, Morocco’s third largest city.

The fight took place after Chabat addressed Lebbar congratulating him for the feast of Eid Al Adha. Instead of doing likewise, Lebbar answered him and said, “he was just a thief and he sold the city of Fez.” As soon the fight broke out, some members of Parliament tried to end it.

The PAM party member claimed that, “Chabat‘s role within the parliament is protecting thugs who have treated him aggressively.” He also accused him of destroying and burning Fez, making its people homeless, and turning it into the capital of criminality.

Lebbar called PAM, “a clean party”, and urged its members to ”cease all kinds of coordination with parties such as the one led by the criminal Chabat.” On the other hand, he called upon the party to look for other alliances that would push people to eagerly engage in politics.

Abd-el-Kader Kihal, another member of Chabat’s Independence party, condemned the behavior of Lebbar, as he emphasized that the suitable place to discuss the problems of Fez is not in the parliament.

Commenting on this incident, Chabat said, “Lebbar’s behavior is abnormal.” Additionally, he told Hespress that, “All what happened is essentially due to many actions he carried out as mayor of the city of Fez.”

Immediately after the incident the PAM party decided to exclude Lebbar from its ranks.

The incident was commented by Moroccans, who deplored the lack of civility of the MPs and their lack of respect towards the King and the Moroccan people.