Austin - The Eid is undoubtedly one of the occasion in which you will be reminded that you are a stranger, no matter how used you may be to your new life. If there were no Arab Muslims around you and you had no connection with home, you might be able to forget about the Eid altogether, but that was not the case with me. 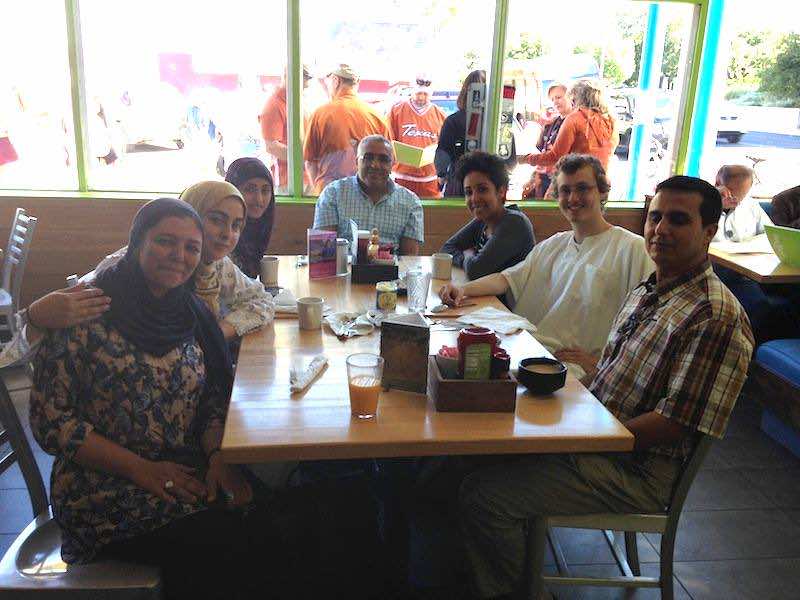 Austin – The Eid is undoubtedly one of the occasion in which you will be reminded that you are a stranger, no matter how used you may be to your new life. If there were no Arab Muslims around you and you had no connection with home, you might be able to forget about the Eid altogether, but that was not the case with me.

The first thing that strikes me about Muslims in America is the relation they make between religion and nationality. Unlike the case in France, for example, where there is an Islamic Council that decides on dates for Eid, Ramadan, and other ceremonies, there is most probably no similar institution for Muslims in America. So, the first issue I had to settle with my Muslim acquaintances was the day of the Eid: while most Arab countries had their Eid on Saturday, Moroccans decided on Sunday. The argument certainly had a nationalistic flavor, but my position was weakened by a decisive factor: number. I was the only Moroccan while the others were mostly from Egypt, Syria, Lebanon, Kuwait and Yemen. So, I yielded. I learnt later on that some Azhar Sheikhs expressed very negative opinions about Morocco’s decision to celebrate the Eid on Sunday instead of Saturday, as most Arabs did. I thought about the question for a while but dropped it quickly: throughout the history of Islam, religious scholars have been idealistic about Islamic Umma. So, there is no wonder that, even in this age of nations and nationalism, they still cling to their chimerical dream of resuscitating the Caliphate from its ashes, if only through such weak symbols as consensus on the date of the Eid.

There was no mosque for the Eid prayer, but the centre for Islamic Studies was rented for that purpose. I have no idea who paid the rent, and whether it was an individual or an association. The prayer brought people from different parts of the world, though the place was small. In the hubbub of American life, I’m sure most of those people will not see each other except on a similar occasion.

There was a decision that we would have breakfast in a coffee shop near campus. We were a host of us: three Egyptians, a Yemeni, a Pakistani American, an American convert and myself. The coffee shop is a flourishing business: we had to wait about forty-five minutes for our turn. During that time, Radwa was the one who watched over everything. She was the one who had the idea of a collective breakfast and, now, she was making sure everything was going according to her plan. Kevin came wearing a gown of the kind people in the Middle East usually wear. He had spent some time in Jordan and Tunisia, and he knows how religious ceremonies are celebrated there. He brought with him a box of dates and insisted that we taste from it. Later on, he noted that he was celebrating his first year as a Muslim.

The coffee shop did not serve Halal food. Of course, we didn’t order meat, but their dishes were mixtures of several things, and there was a real risk that some of the ingredients might contain pork. Kevin was there to help us with the menu. When he pronounced the word “khenzir,” it seemed to me that he was expressing some negative attitude, but in fact he was neutral about that.

In the afternoon, I was invited to a party in Salt Lick, Derwood, some thirty-five kilometers south of Austin. This time, the group was much larger and included almost all the teachers in the Center for Arabic studies. All along the way to Derwood, the scenery was breath-taking: ranches in the midst of an oak forest. My image of Texas was merely an arid and barren land in which only cactus could grow, but Hollywood films were behind the dissemination of such representations. The Salt Lick restaurant and recreation park are situated within a ranch, which gives the place a special beauty. That’s why many people from the city go there, and if they don’t go early, they’ll have to queue for a long time before their turn comes.

We sat at a long table, and an informal one without a tablecloth. Si Mahmoud was the most experienced of us and the most acquainted with the place. With his thirty or more years in America, he was probably the least affected by homesickness. He laughed, told stories and, now and then, made jokes about one of us. Probably because he was the boss, being the director of the Arabic program at UT, he was concerned about the morale of his crew. His high spirits and his generosity did make us forget about home that afternoon.

When we were back in the city, a group of us went to a café called “Kasbah”. It is intended to look like a Moroccan place and, indeed, there was a plate saying “welcome to Morocco”. But the place is owned by a Jordanian, who himself bought it from an Iraqi; so I was told. They served tea in pots not similar to those used by Moroccans, and the tea didn’t taste really Moroccan; nothing here tastes like Moroccan tea!

The Moroccan character of the place encouraged a couple of Egyptians to talk about Moroccan Arabic. They had visited Morocco before, and they recalled funny stories from their visits. But they didn’t forget to mention the good things about the country. One of them pointed out that the tramway in Rabat or Casablanca has no equal even in America. I felt proud, although I tried not to show that. You cannot imagine how such things matter when you are with foreigners. God save our country!