Taroudante, Morocco - The Authenticity and Modernity Party (PAM) has reportedly decided to expel Aziz Lebbar, the party’s Parliamentary Advisor, because of his fight with Hamid Chabat, the Secretary General of the independence Party. 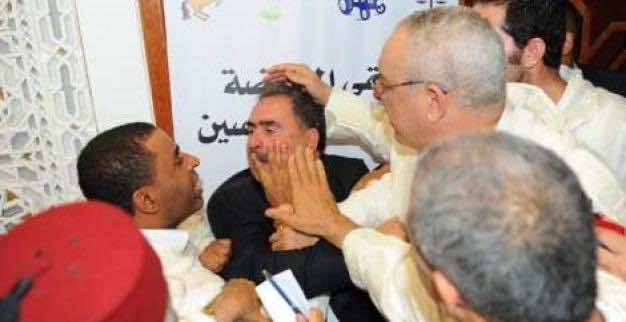 By
Larbi Arbaoui
-
Larbi is a freelance writer and assistant editor at Morocco World News.
Oct 11, 2014
Spread the love

Taroudante, Morocco – The Authenticity and Modernity Party (PAM) has reportedly decided to expel Aziz Lebbar, the party’s Parliamentary Advisor, because of his fight with Hamid Chabat, the Secretary General of the independence Party.

The decision was made shortly after the end of a meeting of opposition groups in Parliament, which followed the speech given by King Mohammed VI on the occasion of the opening of the legislative session.

In a statement, the Authenticity and Modernity Party (PAM) said that it “condemns this irresponsible behavior.”

The communiqué added that the party believes that Lebbar’s provocation of Chabat, which ended in a violent clash between the two Fez natives, was not innocent.

“Occult parties planned this argument whose hidden purpose is to torpedo the initiative to coordinate the action of the opposition in parliament,” the statement said.

The fight broke out after Chabat said “Mabrouk Eid (happy Eid)”, to which Lebbar rudely replied, “You sold Fez … thief.”

The two politicians clashed immediately. The dispute could have escalated, if not for the intervention of other MPs of the opposition.

In this sense, the King called for the establishment of a “code of ethics of political action” that must be passed by both houses of parliament.