Marrakesh  - The President of the Republic of Côte d'Ivoire Alassane Ouattara hailed Sunday in Marrakech the leadership role of King Mohammed VI in Africa. 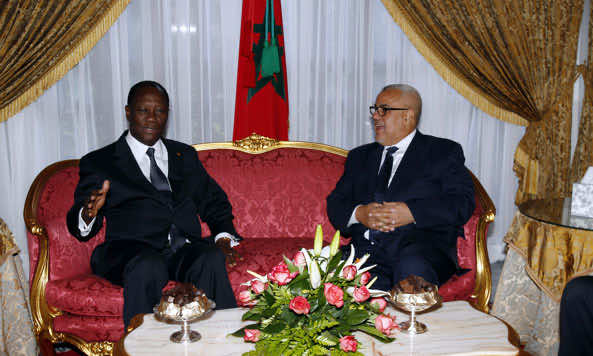 Marrakesh  – The President of the Republic of Côte d’Ivoire Alassane Ouattara hailed Sunday in Marrakech the leadership role of King Mohammed VI in Africa.

“HM King Mohammed VI has a leadership role in Africa capable of helping the continent meet the challenges it faces”, Mr Ouattara told journalists moments after his arrival to Marrakesh where he will take part to the 9th African Development Forum (October 12-16).

The Ivorian president, who said he was “delighted” to be in Morocco, expressed his esteem for the Sovereign who “honoured” Côte d’Ivoire by several visits during the last two years.

Concerning his participation to the 9th African Development Forum, Mr. Ouattara noted that the meeting will focus on “issues that are to the future of the African continent”.

The President of the Republic of Côte d’Ivoire arrived Sunday afternoon to Marrakesh and was welcomed by the head of government Abdelilah Benkirane.