Marrakech - Princess Lalla Salma, Chairwoman of the Lalla Salma Foundation for Cancer Prevention and Treatment, accompanied by Dominique Ouattara, first lady of Côte d'Ivoire and Bernadette Chirac, President of the Fondation Hôpitaux de Paris-Hôpitaux de France, inaugurated, on Monday in Marrakech, the "House of Life," a facility to accommodate the poor patients of the oncology center in the Mohamed VI university hospital of Marrakech. 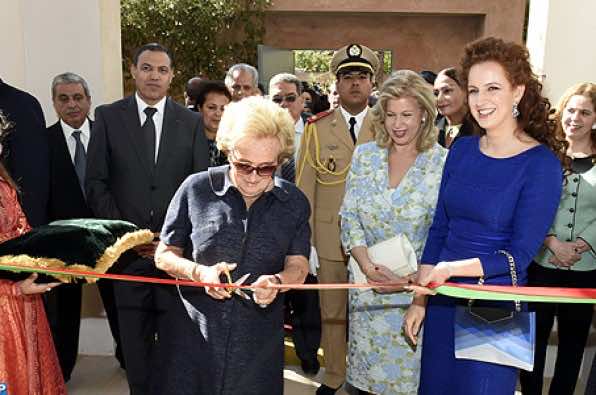 Marrakech – Princess Lalla Salma, Chairwoman of the Lalla Salma Foundation for Cancer Prevention and Treatment, accompanied by Dominique Ouattara, first lady of Côte d’Ivoire and Bernadette Chirac, President of the Fondation Hôpitaux de Paris-Hôpitaux de France, inaugurated, on Monday in Marrakech, the “House of Life,” a facility to accommodate the poor patients of the oncology center in the Mohamed VI university hospital of Marrakech.

Princess Lalla Salma, accompanied by her guests, also visited the Radiotherapy Department of the Mohammed VI University Hospital where a new linear accelerator, offered by the Foundation, was put into service.

The two-floor building, spanning on an area of 2,000 square meters, consists of 22 twin bedrooms, a playroom for children, a dining hall and kitchen, a prayer room, two large lounges, a multipurpose room and administrative blocks.

The “House of Life” will accommodate poor patients and their families who are not residing in Marrakech, during their treatment period at the Oncology Center.

The facility, which can house up to 1,450 people per year, required a budget of MAD 15 million, granted by King Mohammed VI, the Lalla Salma Foundation and the Fondation Hôpitaux de Paris-Hôpitaux de France.

The new linear accelerator will allow to move from 60 to 120 radiotherapy sessions per day and thereby significantly reduce the waiting time of patients from the Marrakech-Tensift-El Haouz and the southern regions.

This project required a budget of MAD 14 million, including MAD 9 million funded by Lalla Salma Foundation in partnership with the Cement Association.

On this occasion, Princess Lalla Salma was briefed on the project to build a hematology and pediatric oncology department at the Mohammed VI University Hospital of Marrakech.

The project, which is part of an initiative of the Lalla Salma Foundation, aims to complement the provision of care in hematology and oncology at the Mohammed VI Mohammed VI University Hospital with an entity dedicated to taking care of very young patients.

To be built on area of 2,300 square meters with an estimated investment of MAD 15 million, the facility will consist of a unit for children and infants, a unit for adolescents and a day hospital.