Washington DC - A high-level Moroccan Trade Delegation will visit the United States for a second time this year at the 2014 Morocco Trade & Investment Forum in Dallas, Texas, on Thursday. 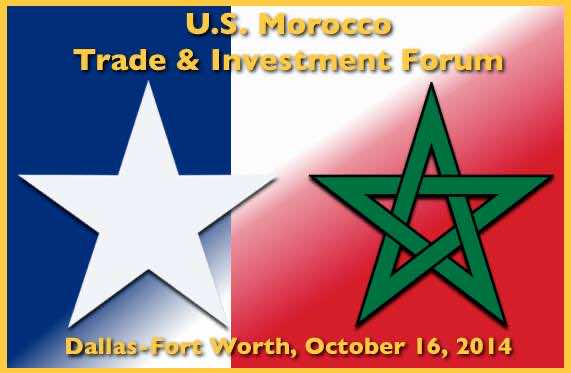 Washington DC – A high-level Moroccan Trade Delegation will visit the United States for a second time this year at the 2014 Morocco Trade & Investment Forum in Dallas, Texas, on Thursday.

The Moroccan Trade Delegation will be meeting with business CEOs, potential investors, and “legendary entrepreneurs”of industry and business in the Lone Star State Thursday. Moroccan Ambassador to the U.S., His Excellency Rachad Bouhlal, and U.S. Ambassador to Morocco, the Honorable Dwight Bush, will provide opening addresses. His Excellency Mamoune Bouhdoud, Morocco’s Minister for Small and Medium Enterprises, will give the keynote address. Presentations are expected by Moroccan Ministers and former ministers, including Amina Benkhadra, the former Minister of Energy who is now in charge of the strategically important National Office of Hydrocarbons and Mines (ONHYM).

Recognizing Morocco’s foundation of progressive government, its powerful Free Trade Agreement with the United States, and its “Advanced Status” with the European Union, the forum is designed to show that Morocco is open for business and ready to partner with U.S. industry and businesses. The presentations are expected to highlight Morocco’s advantages over other countries, such as its economic stability, its skilled workforce, and the fact that it stands at the crossroads of a major international exchange route linking the U.S., Europe, Africa and the Middle East.

The program features one on one meetings with the Ambassadors as well as four afternoon breakout sessions covering aeronautics and manufacturing, infrastructure and logistics, finance, and energy. The energy breakout session will address potential investment opportunities in Morocco’s renewable energy and onshore and offshore oil and natural gas.

Registration is complimentary. Further details and the full program are available at: https://www.dfwworld.org/MBC2014.