Rabat - French President Francois Hollande seized the occasion of the inauguration on Tuesday of the exhibition "Contemporary Morocco" at the Arab World Institute, to highlight the willingness of his country to revive its partnership with Morocco. 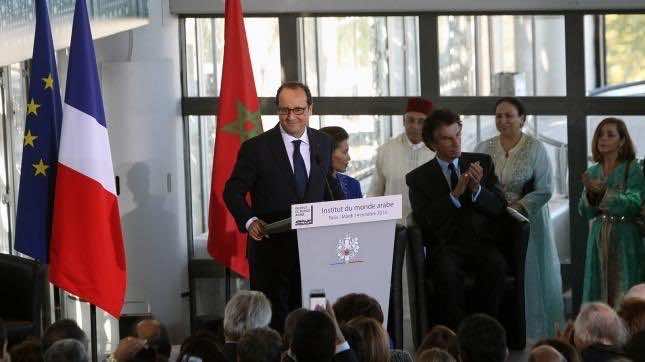 By
Adnane Bennis
-
Adnane Bennis is a national of Morocco, obtained his Bachelor’s Degree in Computer and Information Science from East west University in Chicago.
Oct 14, 2014
Spread the love

Rabat – French President Francois Hollande seized the occasion of the inauguration on Tuesday of the exhibition “Contemporary Morocco” at the Arab World Institute, to highlight the willingness of his country to revive its partnership with Morocco.

In his speech, Holland paid tribute to King Mohammed VI, “with whom [he] maintains friendly relations since [his] accession to the presidency of the Republic.”

“This exhibition is an opportunity to recall the importance I attach to the friendship between France and Morocco,” he said, hoping that “the two countries remain not only exceptional partners but also deepen their cooperation in all areas.”

“I want to maintain the trust and overcome the difficulties that sometimes arise because we need each other,” said the head the French President.

He went on to assay that he will “personally ensure that bilateral relations can be expanded and consolidated.”

The relations between Morocco and France have been strained in recent months after a series of incidents that highlighted a crisis of trust between the leaders of both countries.

Last March, French custom services subjected Moroccan Foreign Minister, Salaheddine Mezouar, to what was described by Moroccan media as a “humiliating” search while he was on transit at Paris Charles De Gaulle airport on his way to Morocco.

The inspection procedure, was long and the head of Moroccan diplomacy was forced to remove his coat, belt and other footwear.

This incident took place a month after the relations between Morocco and France had entered a period of tension following a lawsuit filed by an NGO against Abdellatif Hammouchi, the head of Moroccan Domestic Intelligence Agency (DGST), and the decision of a French judge to send 7 policemen to Moroccan ambassador’s residence to inform Hammouchi, who was accompanying the Interior Minister on a visit to Paris, of a summon issued by the investigating judge.

To make things worse, French press reported few days later a statement made by Javier Bardem, one of the staunch supporters of the Polisario. In the statement, the Spanish actor said that during an alleged meeting he had held with the former French Ambassador to the United Nations in 2011, the French diplomat had told him that “Morocco is a mistress who you sleep with every night, who you don’t particularly love but you have to defend.”

These incidents sparked outrage in Morocco and prompted Paris to apologize to Rabat.