Marrakech - On Monday, Labor MP Grahame Morris' House of Commons motion passed by 274 votes to 12. The motion read, "That this House believes that the government should recognize the state of Palestine alongside the state of Israel as a contribution to securing a negotiated two-state solution." 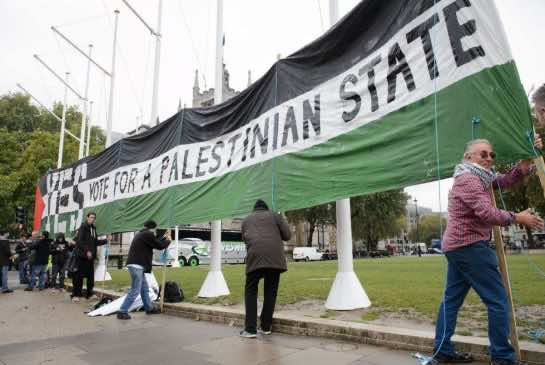 Marrakech – On Monday, Labor MP Grahame Morris’ House of Commons motion passed by 274 votes to 12. The motion read, “That this House believes that the government should recognize the state of Palestine alongside the state of Israel as a contribution to securing a negotiated two-state solution.”

Less than half the House of Commons voted on the motion, which was supported by the Labor Party Leader Ed Miliband. The vote does not bind the British government policy—which states that the UK reserves the right to recognize Palestine when it is “appropriate for the peace process”—according to Middle East Minister Tobias Ellwood.

The Liberal Democrats support recognition of Palestine as a party policy. While the British government is unlikely to change its current policy towards Palestine, support for recognition of Palestine has been growing in the House of Commons by bodies like the Council for Arab –British Understanding (CAABU). The House of Commons showed its independence when it refused to follow Prime Minister David Cameron’s lead on military action against the Assad regime in Syria. It may perhaps produce another such surprise in the future.

Despite the fact that the motion does not affect British government policy, it can nevertheless be recognized as a moral boost for recognition of the Palestinian State. It follows the UN’s recognition of Palestine as having non-state member observer status.

During his visit to Gaza on October 14, UN Secretary General Ban-Ki Moon met with the ministers of the National Consensus Government, calling on them to focus all efforts on “building one Palestine.”

“We stand by you. The international community supports your government’s efforts to assume the security and governance responsibilities in Gaza,” the UN Chief said in remarks following his meeting with top officials of the government— including its Deputy Prime Minister Ziad Abu. “This is a great opportunity to unite the West Bank and Gaza under one Palestinian leadership,” he added.

During the 51-day Israeli bombardment of Gaza, more than 2,100 Palestinians were killed, including over 500 children, and more than 70 Israelis were also killed.