San Francisco - In his speech at the inauguration of the exhibition “Contemporary Morocco,” French President Francois Hollande stated that “Morocco and France remain not only exceptional partners, but also deepen their cooperation in all areas.” He added, “I want to maintain the trust and overcome the difficulties that sometimes arise because we need each other.” 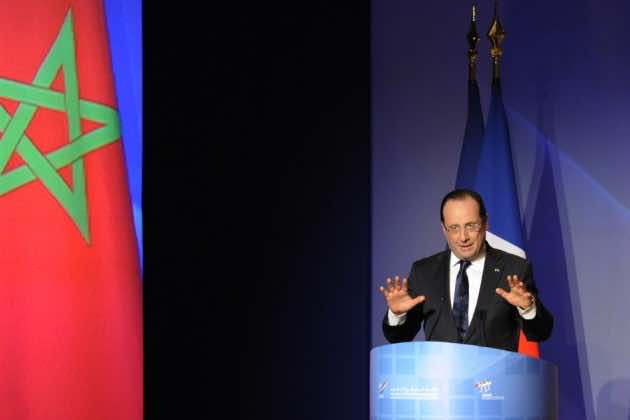 San Francisco – In his speech at the inauguration of the exhibition “Contemporary Morocco,” French President Francois Hollande stated that “Morocco and France remain not only exceptional partners, but also deepen their cooperation in all areas.” He added, “I want to maintain the trust and overcome the difficulties that sometimes arise because we need each other.”

Is the French president having second thoughts?

Has he already forgotten that after his election, he opted to visit France’s former colony Algeria before Morocco? Wasn’t that a clear message to Moroccans—and Algerians, for that matter—that under his administration, things will be a bit different, and that his priority is Algeria. After all, there is more business to be done with Algeria when France’s economy is tanking and Algeria is making billions from the rise of oil prices. He figured that Morocco “is in his pocket” and he does not have to make any effort to maintain Morocco as France’s number one client.

For a while, his assumption was working—especially since Morocco relies heavily on France for support regarding the so-called Western Sahara. One thing Mr. Hollande has not realized is that Morocco is changing and that any relationship between the two countries has to be mutually beneficial. The protectorate has long ended and Morocco is a sovereign country.

It all started when Hillary Clinton retired from office and John Kerry—a good friend of Kerry Kennedy, a supporter of the of the Polisario— took office and stated that he wants to change MINURSO’s mission to include a human rights mandate. But France has not backed Morocco as was the case in the past. France’s UN ambassador Gerard Araud bluntly said that “Morocco is able to defend its interests and the U.S. is able to make proposals when wanting to. No need of France.”

Araud has repeatedly denied threatening to use France’s veto power to block a U.N. rights mechanism for Western Sahara. Obviously, this is not something Morocco is happy to hear, and led the Moroccan monarch to make an emergency trip to meet with Barack Obama: he attempted to convince him to scrap the human rights addition from the resolution that his Secretary of State had suggested.

The relationship between France and Morocco has worsened since the Moroccan king started to visit several African countries. France is unwilling to let go of its colonial past, and has retaliated by sending the French police with a judicial notice for the arrest of the head of the Moroccan Secret Service at the Moroccan ambassador’s residence. Morocco Justice Ministry swiftly hit back by suspending all judicial cooperation agreements between the two countries.

There was also the incident when a Spanish actor revealed to the French newspaper Le Monde that the French ambassador had told him, “Morocco is a mistress with whom we sleep every night even if we aren’t especially in love with her, but that we must defend. In other words, we turn a blind eye.”

To add insult to injury, Morocco’s Foreign Minister Salaheddine Mezouar was asked to remove his shoes, vest, and belt at Paris’ Charles de Gaulle airport as he transited from The Hague to Morocco. His personal effects and suitcase were also searched, despite indicating his position and diplomatic passport.

There was also the incident when a former soldier Mustapha Adib curiously managed to get past security in the hospital where General Abdelaziz Bennani was convalescing, and left a letter insulting the head of the Moroccan military.

The King of Morocco is unhappy with how France still thinks that it can continue to control its former colonies. He cancelled his regular trip to the UN, and instead had his prime minister deliver a speech on his behalf denouncing the long-term consequences of colonialism.

This week, Salaheddine Mezouar, apparently not in the mood of schmoozing either, told an audience composed of party leaders and the ruling majority that “colonial forces are still trying to impose their authority over their former colonies.” He added, “Some thought that Africa belonged to them and they are in a comfortable position as far as Morocco is no longer part of the African Union.” Furthermore, he stated “the resurgence of Morocco in Africa has created a kind of discord that has translated into practice by several acts on the part of those forces.”

Algeria, obviously very happy about this turn of events, is now conveniently being used by France to do its dirty work. The fast-degrading relationship and the constant mutual insults between the two north African neighbors can only be attributed to France, which is the sole beneficiary. France killed 1.5 million Algerians. Apparently, the Algerian regime now believes in the quote “the enemy of my enemy is my friend,” even if France obliterates them.