Marrakech - In its efforts to become a global tourist destination, Merzouga just created an international event that will attract tourists from all over the world. 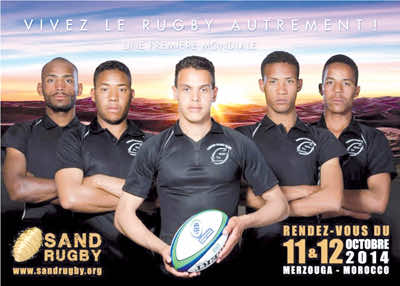 Marrakech – In its efforts to become a global tourist destination, Merzouga just created an international event that will attract tourists from all over the world.

Based on the proverb “when there is a will, there is a way,” Merzouga is moving forward and launching a new global game: Sand Rugby.

The idea to create such game began a few years ago, when a group of tourism professionals thought about how they could improve tourism in the region. For this reason, Merzouga has been chosen as the host of this event. The first Sand Rugby tournament was held on October 11 and 12 at the rugby club of Tinghir.

The organizers stated that the tournament is not only the first of its kind in Morocco, but also in the entire the world. As a new game, it has its own unique characteristics. It is basically played in 40 meter sand stadiums.

Several Moroccan teams participated in the event. Moroccan teams came from Tinghir, Casablanca, Fes, Rabat, and Meknes, and included players from the Netherlands, Saudi Arabia, France, and the United States. Eight teams from France and the islands of Fiji also participated.

The organizers said that it took them about two years to prepare for the tournament. They first worked on the marketing process. A Moroccan delegation travelled to Moscow in 2013, during the rugby world tournament in Russia, to exhibit Sand Rugby as a new creative product. The idea made a positive impression and received encouragement from European and American representatives that have deep experience in the rugby.

At the tournament in Merzouga, the Club of Tinghir won the final match against the French club Lecock.