Spain - In recent days, a group of Moroccan men in Madrid were harassed and violently searched by police for no apparent reason other than their race. 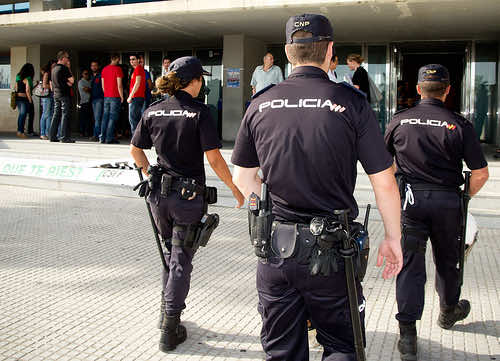 By
Paola Garcia
-
Paola Garcia is a writer and translator from Chihuahua, Mexico.
Oct 18, 2014
Spread the love

Spain – In recent days, a group of Moroccan men in Madrid were harassed and violently searched by police for no apparent reason other than their race.

At the beginning of this video, we see one of the men anxiously explaining to the officer that they are doing nothing wrong. “We are not suspicious, we are clean citizens, drinking something, at a normal hour, in a café that has its license and everything. We have nothing illegal on us,” he clarifies. It is obvious that this is a right that they do not possess; the police ignore his pleas.

Other Moroccan men approach the area asking what is happening. A man tells one of the officers “you are racist, that’s what you are.” Despite their protests of unfairness and racism, the police officers order the men to walk to an alley and line up for a search. The officer states: “gentlemen, all of you, go over there, hands where I can see them, and take out your documentation.” Some of the men protest being treated in this way. The officers proceed to do a body search of the men, telling one of them to “come with me.”

One of the group members says to one of the cops that he is a “bad person,” while another angrily screams into the camera “racists!”

The leading police officer asks an older man who seems intent on keeping the peace and making the “search” go as calmly as possible to help the officers make the rest of the group obey since “they don’t listen to [police officers].” The group listens to this man and walk to the alley to be searched and to show their identity cards.

The man is visibly upset by the humiliation he and the others are being subjected to and resists, asking the cop not to do that to him, as the cop pushes and prods him. Four of the other officers then approach and help the first cop to hold this man down, throw him against the hood of a car, and search him violently, eventually pushing him to the ground while the rest scream in indignation.

It is important to note that these men were doing absolutely nothing wrong. They were having coffee at night amongst friends. In my opinion, this incident is based on nothing other than the prevalent racism against Moroccans in particular, and Arabs in general, that has tragically become acceptable in Spain and that must come to an end immediately.