Taroudante - The Hassan II Mosque, or Grande Mosquée Hassan II, located in Casablanca, Morroco, is considered the fourth most beautiful mosque in the world, according to a ranking announced by Wonderslist. 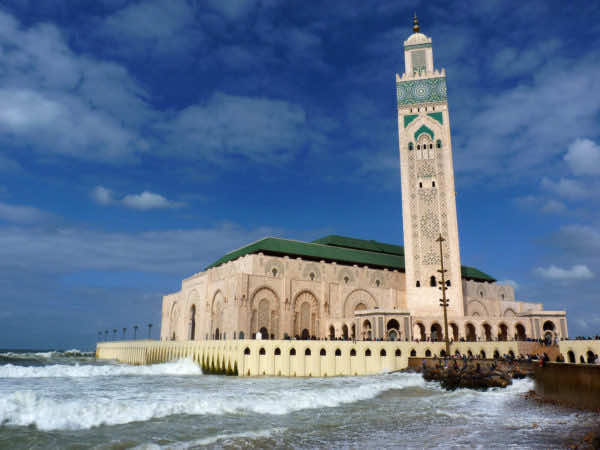 Taroudante – The Hassan II Mosque, or Grande Mosquée Hassan II, located in Casablanca, Morroco, is considered the fourth most beautiful mosque in the world, according to a ranking announced by Wonderslist.

Unchallenged, the world’s most beautiful mosque is Al Haram Mosque in Makkah, Saudi Arabia, which the Quran, the Muslim Holy book, revealed to be the first house built for humanity to worship Allah.

“Indeed, the first House [of worship] established for mankind was that at Makkah – blessed and a guidance for the worlds.” Surat ‘?li `Imr?n (Family of Imran) 96.97

Al-Masjid an-Nabawi, also called the prophet’s mosque, in Medina, Saudi Arabia, comes in second, followed by Al-Aqsa Mosque in Jerusalem, also known as Bayt al-Muqaddas. Al-Aqsa is regarded as the third holiest site in Islam and is located in the Old City of Jerusalem.

Completed in 1993, Hassan II Mosque, the seventh largest mosque in the world, stands on a cliff overlooking the Atlantic Ocean. The seafloor is visible through the glass floor in the building’s hall.

The mosque, with its 210-meter (689 ft) minaret, the world’s tallest, was ranked the best of 31 attractions in Casablanca by TripAdvisor. It can accommodate up to 105,000 worshippers with its outside grounds.

The Grande Mosquée, which attracts a huge crowd of worshippers, especially during Friday prayers and the holy month of Ramadan, is also one of the best tourist attractions in the city.

Non-Muslim tourists are allowed to visit the Mosque only during non-prayer times, accompanied with a guide that gives a comprehensive review of the history and magnificent architecture of the religious building.