Madrid - Spain awarded, on Wednesday, decorations to officials from the General Directorate for Territory Surveillance (DGST) in recognition of Morocco's role in world's peace and security. 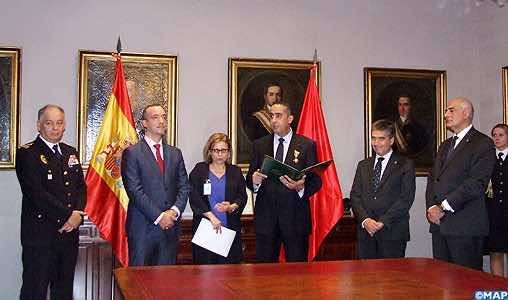 Madrid – Spain awarded, on Wednesday, decorations to officials from the General Directorate for Territory Surveillance (DGST) in recognition of Morocco’s role in world’s peace and security.

During a ceremony in Madrid, Spanish Security state secretary Francisco Martinez Vasquez handed the “Honorary Cross of Police Merit with Red Distinction,” one of the top honorary medals granted to foreigners, to Director General for Territory Surveillance (DGST) Abdellatif Hammouchi.

Two other central directors from the same body were granted by the Security state secretary the “Honorary Cross of Police Merit with White Distinction”.

The medals, which were announced on Oct. 8 on the Spanish Police Day in the presence of Interior Minister Jorge Fernandez Diaz, are a recognition of the excellent relations between the two countries’ security services, based on trust and mutual support.

In fact, security cooperation between Morocco and Spain reached an advanced level, thanks to the efficiency and resourcefulness of the said security services, which shows the DGST position as a reliable partner to fight all forms of criminality.

This status of relations is the fruit of DGST’s acknowledged professionalism and its strong capacity to adapt to human and technological progress, in a regional and international context marked by volatile and diversified threats to peace and stability worldwide. Such know-how allowed to conduct decisive actions in collaboration with different partners mainly Spaniards.

The DGST’s proactive approach enabled to address challenges faced by intelligence services around the globe, notably the pressing need for action to promote peace while preserving freedoms and basic rights.

Abdellatif Hammouchi was awarded by King Mohammed VI the Al Arsh Wissam of Officer Rank in 2011, and was made, in the same year, Knight in the National Order of the Legion of Honor by the President of France.