Rabat  - Morocco and the UN Food and Agriculture Organization (FAO) signed Wednesday in Khemisset two agreements in the agricultural sector. 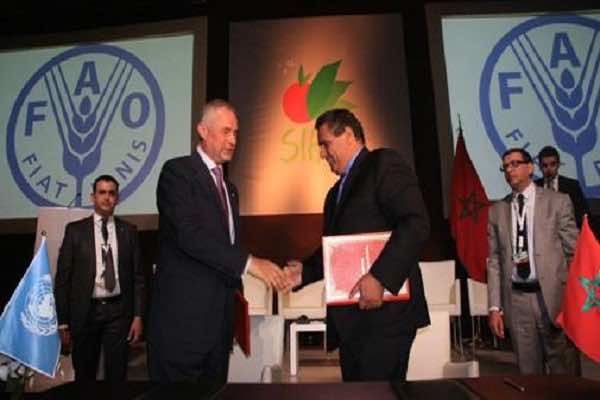 Rabat  – Morocco and the UN Food and Agriculture Organization (FAO) signed Wednesday in Khemisset two agreements in the agricultural sector.

Signed by Agriculture and Marine Fisheries minister Aziz Akhannouch and the FOA representative in Morocco Michael George Hage on the sidelines of the world food Day, the first agreement is aimed at strengthening national capacities for assessing climate change economic impact on agriculture using MOSAICC (MOdelling System for Agricultural Impacts of Climate Change).

Funded by up to $ 133,000 by FAO, the project also aims to implement the system at a national level to carry out an integrated impact assessment of climate change on agriculture and forests.

The second agreement concerns the implementation of a project on the “Disposal of obsolete pesticides including Persistent Organic Pollutants” (POPs) as well as a program of integrated pest and pesticides management.

This project is funded by $ 3.5 million by the Fund for Global Environment in addition to a 24.2 $ million contribution from several Moroccan ministries and institutions.

The project aims to eliminate inventoried obsolete pesticide stockpiles, including POPs and derivative waste and develop a program to prevent further accumulation of stocks in Morocco.