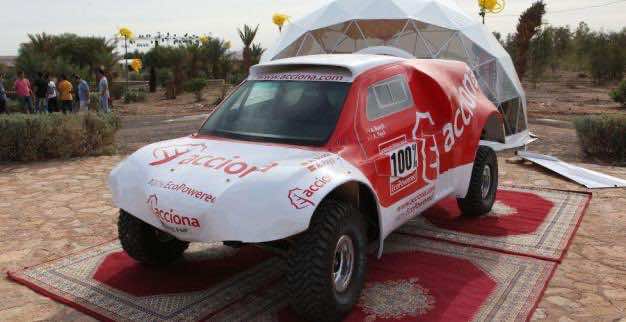 The vehicle, invented by a group of Spanish participants in the festival and designed to contribute to sustainable environmental tourism, amazed the attendees.

Elber Woulsh, a Spanish driver who was part of the design team, said that the 4×4 is “the result of years of work and dreams,” according to the Moroccan Aloula channel. “I belong to lovers of mountain climbing and bike racing. I had the idea of incorporating adventure into the motors of cars on the one hand, and sustainable tourism on the other hand, and then the idea of inventing such a car grew in my and my partners’ minds,” he added.

Hakima El Hayti, Minister Delegate in charge of the Environment, said according to the same source, “the vehicle works with electricity and does not produce any pollution — it can also go for hours and hours. Thus, it is a great source of pride to launch such an invention in Ouarzazate.”

Mustapha Bakkoury, Chairman of the Moroccan Agency for Solar Energy (MASEN), said “the invention is an evidence of Morocco’s renewable energy plan, as it demonstrates that the vision under the leadership of King Mohammed VI for the future of energy in Morocco is on the right path.”

The electric 4×4 is on exhibition and highlights Morocco’s solar festival in Ouarzazate.