Marrakech - The first thermal solar power station in Morocco, which is a part of a development project costing seven billion Euros, will be launched in 2015. 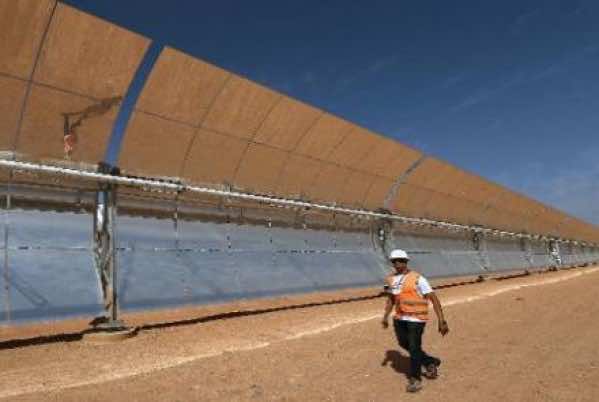 Marrakech – The first thermal solar power station in Morocco, which is a part of a development project costing seven billion Euros, will be launched in 2015.

In a statement to AFP, the chairman of the Moroccan Agency of Solar Energy, Mr. Mustapha Elbakoury, stated, “According to the program, the progress made by the workshop Basin of Ouarzazate will allow the station, ‘Nour 1’ to enter into action next year [2015].”

Nour 1 is the first thermal station, which is powered by solar energy and costs more than 600 million Euros. It will generate 160 megawatts of power. The task of its building went to the company Consortium, which is primarily supported by shareholders in Saudi Arabia.

Elbakoury continued: “the ambitious project aiming at producing 2,000 megawatts of solar power by 2020 is progressing in a satisfactory way.”

Morocco plans to build five stations to generate electricity from solar energy. The first one will be Ouarzazate station at the gates of the desert, which is estimated to generate 500 megawatts and is foreseen to be one of the biggest such programs in the world.

According to Elbakoury, the second phase of the implementation of the stations “Noor 2” and “Nour 3” will start in the beginning of 2015.

Elbakoury also stated that the announcement of the third phase of the project will take place “in the coming weeks.”

According to AFP, Morocco, which does not have large reserves of hydrocarbons, is aiming at covering 42 percent of its power needs through renewable energies by 2020.

In addition to solar energy, Morocco is betting on wind energy development, and it is building the largest station on the continent for this purpose in Tarfaya.