Rabat- Moroccan unions confirmed their decision to take part in a national strike on October 29 as a warning to the government's lack of communication and dialogue. 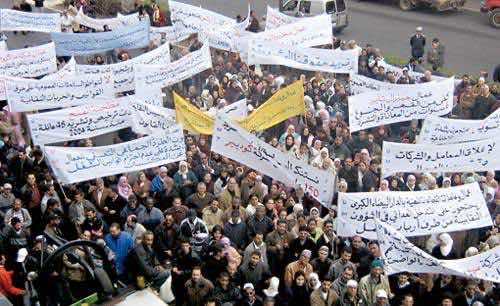 Rabat- Moroccan unions confirmed their decision to take part in a national strike on October 29 as a warning to the government’s lack of communication and dialogue.

Discussing the reasons behind this public strike, the three unions indicated that after the latter failed to compel the government to organize a collective dialogue as set forth in the International Labour Organization and the Labour Code they were forced to act. They also stressed that the positive will of unions collided with a political and governmental mindset that is closed off and unable to positively deal with the issues of wage earners and all citizens.

In a joint statement, the labor unions noted the important reasons to strike, represented mainly in the crisis in dialogue and collective bargaining in Morocco. They leveled their criticism towards the government for closing the door of communication and dialogue with labor unions.

They also criticized the government’s unilateral approach in treating matters of national interest through unjust decisions, mainly on issues including the Compensation Fund and the National Pension Fund.

Similarly, the increase in prices of fuel, water, and electricity bills, food and transportation have recently hit the purchasing power of wage earners and citizens. Thus, unions’ tasks and responsibilities towards the labor class pushed them to address the government’s unpopular policies and failure to fulfill its promises and obligations.