Erfoud  -   Morocco expects its dates output to reach 92,000 tons in 2014, down by 12 pc compared to 2013 as a result of low rainfall, said on Thursday agriculture and sea fisheries minister, Aziz Akhannouch. 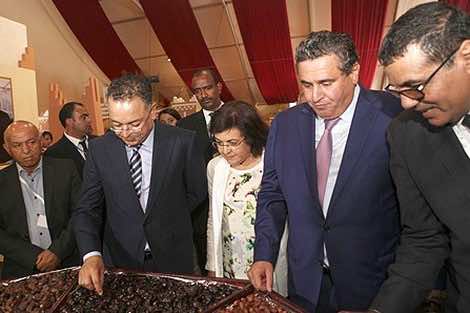 Erfoud  –   Morocco expects its dates output to reach 92,000 tons in 2014, down by 12 pc compared to 2013 as a result of low rainfall, said on Thursday agriculture and sea fisheries minister, Aziz Akhannouch.

However, he went on in a press briefing on the sidelines of the 5th international dates fair in Morocco (Sidattes 2014), top quality varieties destined to export will post a surplus in the 2016-2017 season, due to increased investments in high added-value varieties.

Part of the Green Morocco plan, Morocco has set very ambitious objectives to develop date production, including the creation of 17,000 hectares of modern farms.

Date production’s turnover is estimated annually at 2.7 billion dh and will reach 7 billion DH in 2020 with the Kingdom expected to reach self-sufficiency with an output of 160,000 tons, he went on.

A dam, with a capacity of 280 million cubic meters of water, will be built in the southeastern region of Tafilalet to irrigate around 5,000 to 6,000 hectares of palm groves.

Some 190 participants from several date-producing countries are present in this fair.

Palm groves are extending over around 48,000 hectares with an estimated 4.8 million palm trees, making of Morocco the 3rd largest date producer in the Maghreb and 7th worldwide.

Date production contributes 40 to 60 pc in the agricultural income and employs 4,600 workers on a permanent basis.

Morocco imports around 30 pc of its date needs.