Geneva - Morocco received Thursday in Geneva the UN INSARAG certification of classification for complying with the Unite Nations standards on disaster management, delivered by the International Search and Rescue Advisory Group (INSARAG). 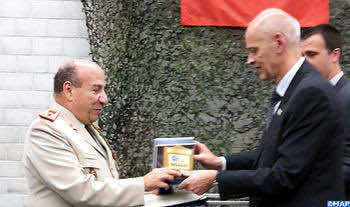 Geneva – Morocco received Thursday in Geneva the UN INSARAG certification of classification for complying with the Unite Nations standards on disaster management, delivered by the International Search and Rescue Advisory Group (INSARAG).

The award ceremony of the UN prestigious certification took place in Geneva following three days of high-level exercise on intervention in case of earthquake in the presence of international observers.

The Moroccan heavy team is the first among the INSARAG classified units to deploy all its human and material resources outside the national territory to participate in this exercise initiated under the auspices of the UN Office for the Coordination of humanitarian Affairs (OCHA).

The primary intention of the INSARAG certification is to provide better understanding of the individual abilities of urban search and rescue teams (USAR) making themselves available for international assistance, according to INSARAG.

Having teams classified according to a standard enable disaster affected countries to prioritise acceptance of international response support from USAR teams who can add proven value to their national capacity, the same source added.

The UN INSARAG certification is an independent, verifiable, voluntary process that has received unanimous acceptance through the INSARAG.