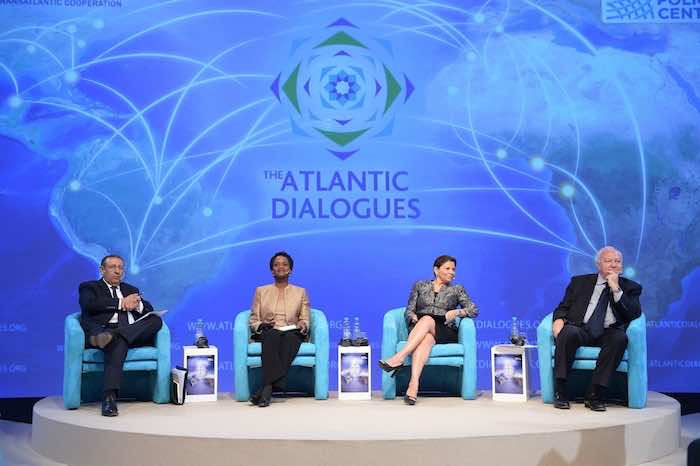 Under the High Patronage of King Mohammed VI, the Atlantic Dialogues gathered some of the most influential public and private sector leaders from around the Atlantic basin for high level panels and open discussion on cross-regional issues. The event was co-organized by the German Marshal Fund of the United States, and the Office chérifien des phosphates (OCP) Policy Center.

The Atlantic Dialogues selected the 50 emerging leaders of the Atlantic basin. Ten Moroccans were selected among the 50 leaders and had the opportunity to articulate their leadership and discuss transatlantic issues with senior leaders.

For Lamia Bazir, a 24-years prominent leader, “The diversity between the countries of the Atlantic offers both an opportunity and a challenge.” In her speech, she invited the leaders of the region to “conceive an innovative model of a region founded not on commonalities but on differences.” Instead of denying differences in the search of a common identity, Lamia Bazir encouraged participants to “turn the Atlantic Basin into a space where diversity is valued, best practices are shared, and the best ideas circulate between countries.”

For Njoya Tikum, a young leader from Cameroun “The most important is to translate the discussions held in the Atlantic dialogues into the daily lives of the citizens”. In his speech, Njoya also insisted on the inclusion of Youth in decision making.

During the forum, Morocco demonstrated its pivotal position in the Atlantic region and the incredible potential of its youth.

The forum brought together some 400 high-level diplomats, policymakers, experts, business leaders, and opinion-shapers from Africa, the Americas, the Caribbean, and Europe for three days of open discussion.