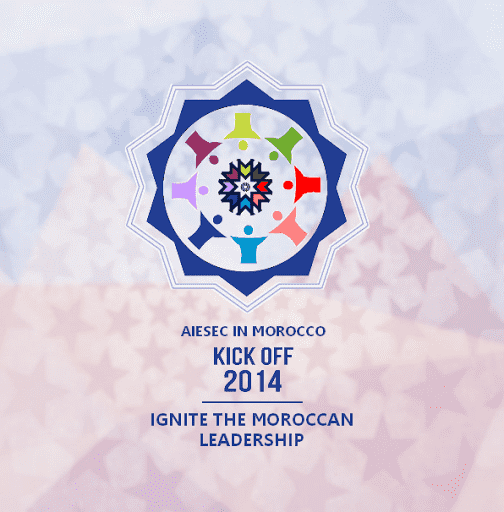 Marrakech- The Local Committee “Les Ambassadeurs”, a part of AIESEC Morocco, is organizing a large annual conference, known as KICK-OFF, on the 27-27 of November, 2014 in Marrakech.

Approximately 500 attendants are expected, including national and international facilitators who will share their experiences and knowledge throughout their sessions.

The Kick-Off is a national event put on by a team of young, ambitious, and motivated students, whose aim is to give the tools and techniques of professionalism for the managers of tomorrow, an opportunity to express and share their ideas in public, take initiatives, fit a project from A to Z, manage a team, and acquire autonomy and responsibilities.

At the end of our event, we hope that we will be able to provide a rewarding and original experience to each of the delegates. Through the success stories of our speakers, we will build and clarify their visions of the future. We will know how to show enthusiasm and motivation necessary to awaken excellence.

AIESEC – International Association of Students in Economic and Commercial Science – is the world’s largest apolitical and non-profit organization that is managed by students. It is an international platform for the students to get a taste of the professional world in a young and dynamic framework at the international level.

AIESEC’s activities focus on an international internship exchange program. The organization’s network accounts for 100,000 members in 125 countries, distributed at more than 2400 universities, and AIESEC completes more than 17000 exchanges annually.

Since its creation in Morocco in 1986, the organization has hosted several generations of students, who are later often called to key positions in national and international companies.

AIESEC Morocco currently has a national office, which administers contracts and plays the role of intermediary between the national and the international levels of the organization. It has five local offices located in Rabat, Casablanca, Marrakech and Ifrane, three special units in Fez, Tangier, and Mahdia, as well as a wide network of alumni who are leaders on the economic and social scene.

What is the goal of this organization?

In association with several corporations (such as General Company, Alcatel-Lucent, Google, HP Invent, Microsoft, and Sagem) and higher education institutions, AIESEC offers its members the opportunity to receive an international experience, access to a learning environment, and overall have a positive impact on the companies and initiate the students’ professional lives.

This international network supports young people during their integration into society through experiences that develop the leadership potential. AIESEC allows young people to be citizens of the world and more than just students. Thanks to AIESEC, students can learn to surpass themselves, get out of their comfort zone, and cope with difficult situations that they might encounter in the professional world.

To fulfill its commitments, AIESEC has offered its members a wide range of opportunities to obtain an international perspective through internships abroad, missions, conferences, seminars, career opportunities, and leadership positions.