Rabat- A picture of Mohammed Idammar, a member of the Party of Justice and Development (PJD) and the head of the urban municipality of Tetouan, giving a chicken to an elderly woman went viral on social networks. 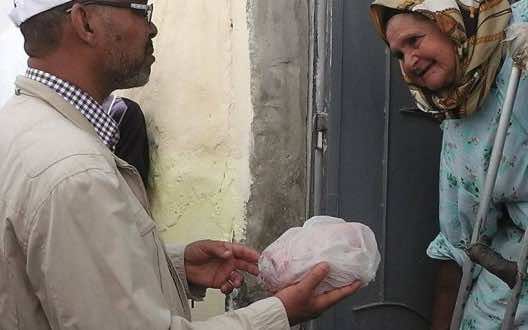 Rabat- A picture of Mohammed Idammar, a member of the Party of Justice and Development (PJD) and the head of the urban municipality of Tetouan, giving a chicken to an elderly woman went viral on social networks.

Several artists and celebrities have already published their own pictures providing assistance to the poor. For example, last July a member of the Socialist Union Party posted a picture of herself giving yogurt to a poor woman.

Moroccan FaceBook users condemn such behavior, as they find it unacceptable to take advantage of poor people for political campaigns.

But unlike other politicians who posted their charity pictures on their Facebook accounts, it is unclear whether the picture was posted by the PJD member himself or was taken by someone else without his knowledge.

Last summer, pictures of Hamid Chabat, the Secretary General of the Istiqlal Party, praying at his house, and pictures of the Parliamentary Councilor Latifa Ziouani posing for the camera as she handed food to a beggar caused controversy on Moroccan social media.

As pointed out at the time by Moroccan Magazine Telquel, Chabat and Ziouani posted pictures of themselves on their public social media profiles, “in a bid to exploit social media in order to gain more popularity.”