Fez - King Mohammed VI visited Wednesday the restoration worksite of Borj Sidi Bounafae, a project that is part and parcel of a MAD 285.5 million program of restoration and rehabilitation of historical monuments in the old medina of Fez. 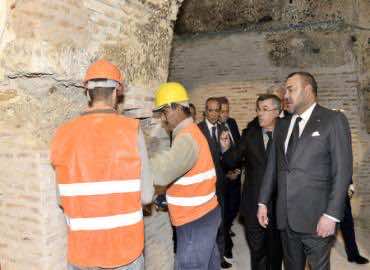 Fez – King Mohammed VI visited Wednesday the restoration worksite of Borj Sidi Bounafae, a project that is part and parcel of a MAD 285.5 million program of restoration and rehabilitation of historical monuments in the old medina of Fez.

The program provides for the rehabilitation of 27 historical monuments including Medersas, Borjs, Foundouks, tanneries, walls and bridges. Thanks to its historical and civilizational character, Fez was recorded in 1981 by UNESCO as World Heritage of Humanity.

Fourteen of the 27 projects planned under this four-year program (2013-2016) are underway, including the restoration project of Borj Sidi Bounafae, built in 1550 by Sultan Ahmed Al Mansour Assaadi. Works are due to be completed within 12 months for MAD 10.2 million.

Originally built to strengthen Fez’ defense capabilities against external threats, this fort will be converted into a museum.

This pilot project is part of the program of restoration and rehabilitation of historical monuments in the old medina of fez whose framework agreements were signed on March 4, 2013 under the chairmanship of  King Mohammed VI.

The various actions set under this programme will contribute to strengthening tourist tours at the old medina, improving the built area, enhancing socio-economic development of the city and preserving the authentic character of this age-old city.