Rabat-The Polisario Front has threatened it described as a new armed ‘struggle’ against Morocco in response to the speech delivered by King Mohammed VI last week on the 39th anniversary of the Green March. In the speech, the monarch emphasized that the Sahara would remain under Moroccan sovereignty until the end of time. 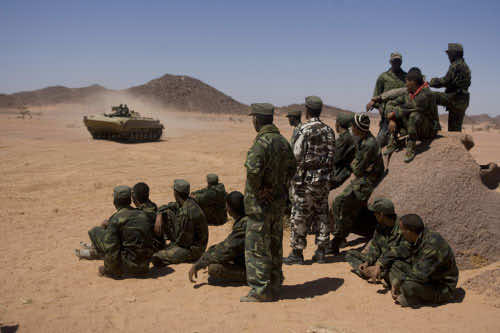 Rabat-The Polisario Front has threatened it described as a new armed ‘struggle’ against Morocco in response to the speech delivered by King Mohammed VI last week on the 39th anniversary of the Green March. In the speech, the monarch emphasized that the Sahara would remain under Moroccan sovereignty until the end of time.

In a statement he issued from Algeria, Mohamed Salem Ouled Salek, Minister of Foreign Affairs in the self-proclaimed Sahrawi Arab Democratic Republic, said that the Sahrawi people “will have no choice but to return to armed struggle due to international inertia and Morocco’s lack of respect for international law.”

The Moroccan monarch confirmed last week that the Sahara will remain part of Morocco “until God inherits the earth and everything with it”, adding that “the autonomy plan is the most that Moroccan can provide” in order to reach a political and mutually acceptable solution.

Morocco accused Algeria of being the main obstacle hindering the process of finding an ever-lasting solution to the ‘Western Sahara’ conflict.

“Unless Algeria – the main party in this conflict – is held accountable, there will be no solution. Moreover, without a responsible approach to the tense security situation in the region, there will be no stability,” the King said.

In a statement at the United Nations last July, Omar Hilale, the Moroccan Ambassador to the United Nations said that any breakthrough in negotiations over the Moroccan Sahara issue requires a “sincere and good faith” commitment by all parties, especially by Algeria. This country, in particular, must show the necessary political will to break the deadlock over the process.