Fez - Political Islam has been criticized and condemned as a potential threat to the diversity and stability of world peace, particularly within the Arab nations. The so-called Arab Spring has brought about radical changes on political and social levels leading to the evolution of Islamic groups as newly and democratically elected entities. 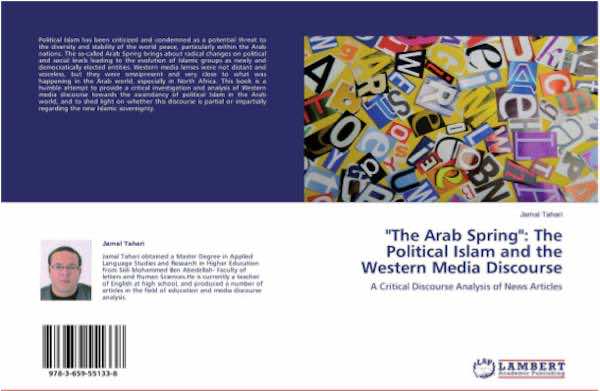 Fez – Political Islam has been criticized and condemned as a potential threat to the diversity and stability of world peace, particularly within the Arab nations. The so-called Arab Spring has brought about radical changes on political and social levels leading to the evolution of Islamic groups as newly and democratically elected entities.

Western media lenses were not distant and voiceless but were omnipresent and vigilant to what was happening in the Arab world, especially in North Africa.

Just recently, a book titled “The Arab Spring”: The Political Islam and the Western Media Discourse was published by LAP Lambert Academic Publishing on July 28, 2014. The book is written by Moroccan researcher and teacher of English Tahari Jamal.

This book is a humble attempt to provide a critical investigation and analysis of Western media discourse towards the ascendancy of political Islam in the Arab world and to shed light on whether this discourse is partial or impartial regarding the new Islamic sovereignty.

The book responds to the need of investigating the Western media discourse towards the newly democratically elected political entities and the rise of Islamic movement as a power within the Arab nations.

The analysis lends itself to a number of the latest Western media publications, which portray Political Islam as a critical social participant in the Arab’s world’s process of change. The book also looks back to the past, before September 11, 2011, when Muslims were put under suspect. After that day, Western media’s experts, producers, and columnists attacked Islam and depicted it as a religion of terrorism, extremism, hatred for non-believers, and violence.

The media, at that time, launched its giant war against Islam and its holistic principles and morals and has sustained negative images and stereotypes about Muslims in all parts of the world for more than (just thinking that if it started in 2001, that is been 13 years, so more than a decade) a decade.

The book attempts to explore to what extent Western discourse has changed towards Islam, mainly in regards to political Islam as a new power ruling the national and international affairs of its people. It also aims to discover the extent to which those sustained negative images have replaced the previous image of Islam as a religion of co-existence, tolerance, and justice.